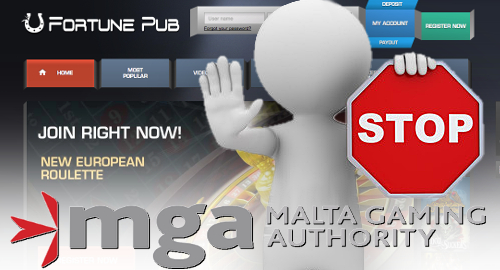 Malta’s gambling regulator has disavowed any connection with a flurry of online gambling sites.

Winner-bet.com is currently inaccessible, but the other naughty nine domains are going strong. The Malta-based GreatWay is operated by TEM Group Ltd, while Fortunepub.com and Wpcasino.net (Winn-Palace) are owned by the Malta-based Nordic Gaming Group/Bremor Holding.

Play-azart.com and Casino-royal.net claim to be owned by Williambet Anjouan and licensed by the Anjouan Lotteries and Gaming Authority. (The MGA dropped the boom on another Anjouan LGA site – black-white-casino.com – last November.) In case you were wondering, Anjouan is an island in the Indian Ocean that’s part of the Union of the Comoros, which may or may not have been a Duran Duran song.

Most of the offending sites offered words and symbols suggesting that they were licensed by Malta’s Lotteries and Gaming Authority (LGA), which was the MGA’s previous identify before it rebranded two years ago. Many of the dates of these licenses are at least five years old.

BELGIUM DOES ITS RODNEY DANGERFIELD IMPRESSION
Meanwhile, the MGA is itself coming under fire from rival gaming regulators in Belgium for showing “disrespect” for that country’s online gambling blacklist.

Malta is scheduled to host the 18th meeting of the European Commission’s Expert Group on Gambling Services on Thursday, as befitting Malta’s current role as president of the Council of the European Union. The following day, the MGA will host a conference to discuss “the developing landscape of gaming regulation.”

Trouble is, two of the MGA’s invited speakers for the Friday conference work for companies that the Belgian Gaming Commission (BGC) has placed on its list of operators serving Belgian punters without a local license. The BGC, European Lotteries and two Belgian Members of the European Parliament have all sent letters demanding that the MGA reconsider its guest list, or else they’ll, er, send more letters or something.