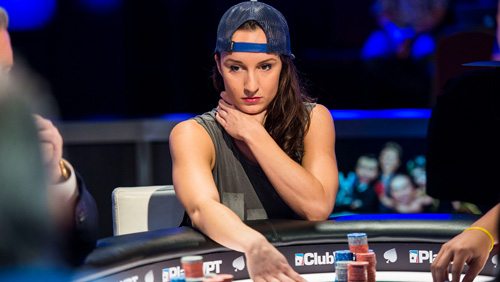 Ema Zajmovic, a cash game grinder from Montreal, has become the first woman to win a World Poker Tour Main Event title in the show’s 15-year history after victory in her hometown.


It took over 15-years, but a female poker player has won a World Poker Tour (WPT) Main Event title.

Ema Zajmovic, a cash game grinder from Montreal, defeated a field of 380-entrants to win the WPT Playground Main Event in her hometown after beating Jean-Francois Bouchard in heads-up action.

The victory earned Zajmovic $200,769; a WWE Wrestling style belt, and a seat in the WPT Tournament of Champions. Before this event, Zajmovic’s experience in live tournaments was limited. She finished 929th in the World Series of Poker (WSOP) Main Event in the Summer and followed that up with a fifth-place finish in the WPT Playground Main Event that Mike Sexton won.

“She is a combo of Phil Ivey and Vanessa Selbst,” said Sexton after her recent victory.

Zajmovic won her seat playing online at partypoker, and we can expect to see her appearing at more WPT events, this season, after nestling in fourth position in the Hublot Player of the Year race.

The WPT record-breaker told reporters how wonderful it was to have so many females on the rail rooting for her.

“When I started playing poker, there was so much competition between girls. It was hard to be good and be supportive of each other.” Said Zajmovic. “Honestly, I am really happy that I proved women could do it.”


So why hadn’t a female player won a WPT Main Event title before now?

Very few female’s play poker. Perhaps, that will change now Zajmovic’s face is popping up in front of people as they eat their cornflakes this week.

The next WPT events are as follows: