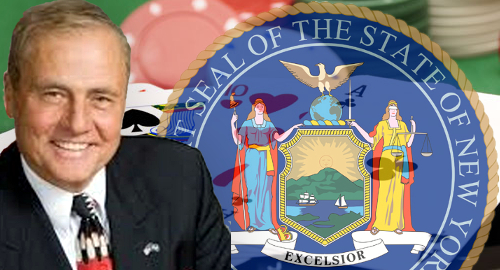 New York has launched its latest push to legalize online poker within its borders, but it faces its traditionally uncertain path to becoming law.

On Friday, state Sen. John Bonacic (pictured) introduced S-3898, which aims to amend state racing, pari-mutuel wagering and breeding laws to permit “certain interactive poker games,” including but not limited to Texas Hold’em and Omaha Hold’em. The bill has been duly referred to the Senate’s Racing, Gaming and Wagering committee, which Bonacic chairs.

The bill is essentially a retread of the S-5302 legislation that Bonacic was pushing last year. That bill made it successfully through the state Senate in the dying days of the 2015-16 legislative session, only to be utterly ignored by the state Assembly, which left S-5302 to wither and die on the vine.

S-3898 would allow for up to 11 online poker licensees, one more than in S-5302. Licensees have to be already licensed to operate either video lottery gaming or a class III gaming facility. These entities can partner with a “significant vendor” to supply their technology, provided that third party clears the standard ‘suitability’ hurdles.

As with S-5302, New York’s online poker licensees will have to pay a one-time fee of $10m, which will be credited against future tax obligations of 15% of gross gaming revenue. Licenses would be valid for a 10-year period. New York would be permitted to strike liquidity-sharing deals with other gambling-friendly states.

S-3898 will likely take its traditionally speedy path through the Senate but it’s anyone’s guess whether Assembly gaming committee chair Gary Pretlow will be any more amenable to allowing online poker to cross the Assembly’s threshold this time around.

Earlier this month, Pretlow told GamblingCompliance that a lot of his fears re collusion and fraud were assuaged following a field trip to witness New Jersey’s intrastate online gambling market in action, but he also claimed there remained “a lot of resistance” in the Assembly to legal online poker.

GAMBLE ONLINE OR DIE IN NEW HAMPSHIRE
Moving further up the eastern seaboard, a trio of New Hampshire state representatives have filed HB 562-FN, “an act allowing online gambling.” The bill is a stub, seeking only to insert a new subparagraph exempting “gambling done over an internet connection on a website on the internet” from the state’s list of illegal gambling offenses.

The bill’s explanatory text notes that the state’s Department of Justice “to date has neither investigated nor prosecuted online gaming offenses and therefore does not expect this bill to have any impact on expenditures.” However, the authors concede that allowing online gambling “may have an indeterminable impact on lottery and charitable gaming revenue.”

In the off chance that HB 562-FN makes the grade in the Live Free or Die state, its provisions would take effect January 1, 2018.