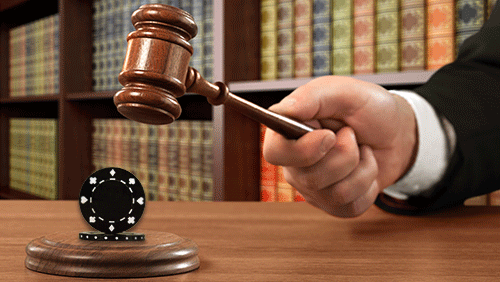 Three poker court cases to get you up to speed on including Phil Ivey‘s plans to take his Borgata argument to the Third Circuit; the Poker Players Championship legal intensifies, and Christian Lusardi is still behind bars.

I’m no Saul Goodman, but reading between the lines of an article that appeared in northjersey.com, Phil Ivey’s legal beagles are not surrendering his $10m to The Borgata without a fight.

Ivey’s legal representatives are pushing for District Judge Noel L. Hillman to enter his summary judgment of the case as ‘Final Judgment’. If those two words are stencilled in, then it allows the argument to be sent to the United States Court of Appeals for the Third Circuit.

Ivey (The Joker) and Cheng Yin Sun (Harley Quinn) lost Round 1 vs. The Borgata after Judge Hillman formed the opinion that using ‘Edge Sorting’ techniques to gain an advantage against the house broke an invisible contract between the two parties.

The law decided the best way to resolve the spat was to do a Cher and turn back time before a hand of Baccarat was dealt meaning Ivey would have to repay the $10 million plus a chunk of change he won playing Craps with his winnings.

It’s debatable whether Ivey still has the money lying around hence his eagerness to push forward with his battle against the superpowers of the casino. The only impediment to the Final Judgment that Ivey wants to see jotted down by Judge Hillman is the ongoing dispute between The Borgata and the card manufacturer Gemaco, Inc. (who created the defective cards that allowed Sun to use her mutant powers to win Ivey all that money).

The motion hearing is scheduled for Feb 21.

Five poker players are suing Tampa Bay Downs in connection with the ongoing legal wrangle between founders of the Poker Players Championships (PPC) and players who were not made whole after their recent visit to the PPC World Championships in Aruba.

Stephen Deutsch, Michael Lerner, John Ott, and Joan Sandoval – who have already sued the PPC, various other PPC owned entities and Maryland Live! – were joined by James Beadnell in the new lawsuit (Beadnell finished runner-up in that Aruba event).

The quintet is raising five charges against the Tampa Bay Downs Silks Poker Room, who ran satellites for the Aruba event, provided dealers and floor staff, as well as getting involved with a lot of co-branding for the event.

The players are charging the poker room with two counts of negligent misrepresentation, one count of negligence, unjust enrichment, and negligence per se (statutory violation).

Maurice “Mac” VerStanding, legal representation for the players, called the PPC a ‘Ponzi Scheme’ after founders Bryan T. Oulton and Thomas “Sandy” Swartzbaugh ensured the Top 7 players from the Aruba event received $10,000 each but no more.

The case continues with both Oulton and Swartzbaugh quickly deleting their social media tracks.

Thanks to Haley Hintze over at Flushdraw for the scoop on this one.

Christian Lusardi is Behind Bars

I guess you shouldn’t believe anything you read, especially if I write it.

I incorrectly informed you that the Borgata ‘ChipGate’ villain, Christian Lusardi, had been released from prison after serving only eight months of two and five-year sentences for this counterfeit chip and DVD scandals.

Writing for NJ No Deposit Casinos, Jessica Welman, got the real scoop, establishing that Lusardi is currently behind bars in a medium-security prison and that the news of his early release just meant a transfer from one home without a view in New Jersey to one in South Carolina.

He is scheduled for release in June 2019.