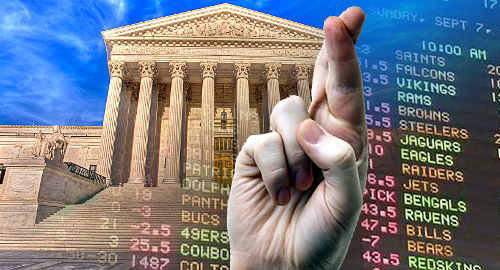 New Jersey’s push for legal sports betting remains alive after the US Supreme Court sought more guidance on whether to consider the state’s case.

On Tuesday, the Supreme Court invited the nation’s Acting Solicitor General to submit a brief on New Jersey’s latest sports betting legislation, which would authorize the activity at Atlantic City casinos and state racetracks, in order that the Court can determine “the views of the United States.”

The legislation was struck down by the US Third Circuit Court of Appeals last August, a similar fate that befell the state’s earlier efforts. In 2014, the Supreme Court declined to hear New Jersey’s Hail Mary appeal, but the circumstances of the state’s latest bill appear to have piqued the interest of at least some of the Court justices.

At issue is whether New Jersey’s plan to selectively repeal state-level prohibitions against sports betting at casinos and racetracks falls afoul of the federal PASPA sports betting ban. The state has argued that PASPA violates the US Constitution’s rules against the federal government ‘commandeering’ the rights of states to decide what goes on inside their borders.

Should the Court choose to hear New Jersey’s appeal, there are multiple possible outcomes, including an outright rejection. The Court could approve the state’s plan, which would likely lead to a flood of similar state-level sports betting pushes, but the Court could also take a bolder stance and declare the oft-derided PASPA unconstitutional, thus ending Nevada’s single-game sports betting monopoly once and for all.

The Supreme Court’s Call for the Views of the Solicitor General (CVSG) will offer the first tangible insight into the gambling views of the incoming administration of President-Elect Donald Trump (whose sister Maryanne Trump Barry was among the Third Circuit judges who rejected New Jersey’s latest bid in 2015).

It’s anyone’s guess when Trump’s Solicitor General might file the government’s brief, after which the Court will decide whether or not to hear New Jersey’s appeal. It’s equally unclear who Trump may pick to serve as Solicitor General. Media scuttlebutt has narrowed the shortlist down to Chuck Cooper, a right-wing litigator who has close ties to Sen. Jeff Sessions, Trump’s nominee for US Attorney General, and George Conway, husband of Trump media point person Kellyanne Conway.