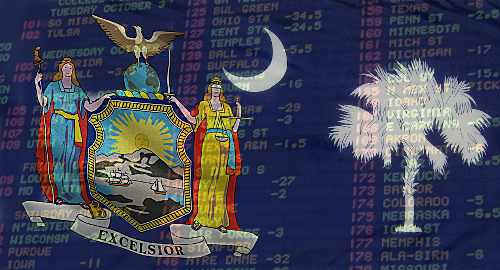 Two US states have introduced new sports betting legislation but it won’t mean much unless the US Supreme Court agrees that it’s time to reconsider a federal ban on the activity outside Nevada.

This week saw South Carolina State Rep. Todd Rutherford introduce House Joint Resolution H3102, which seeks to authorize multiple forms of gambling in the state, including sports betting. Rutherford has introduced similar legislation in the past without success.

For the record, one of S01282’s sponsors is Sen. Tony Avella, who has been introducing bills of this sort since 2012 without success. New York Assemblyman Gary Pretlow is expected to introduce a rival sports betting bill later this year that in his own words is intended to “pressure the Congress” into amending or repealing PASPA.

And there’s the rub: so long as PASPA is on the books, states can propose and/or pass all the sports betting legislation they want and it won’t mean a thing. New Jersey has passed multiple sports betting laws but these have all been shot down by federal courts, and any state that wants to go down this route will have to run the same legal gauntlet.

The US Supreme Court is expected to announce soon whether it will hear New Jersey’s latest appeal of lower courts’ rejections of its sports betting law. But unless (a) the Court agrees to hear the case and rules in New Jersey’s favor or (b) federal pols agree to scrap PASPA, all of this state-level sports betting activity is simply legislators trawling for lobbying dollars.