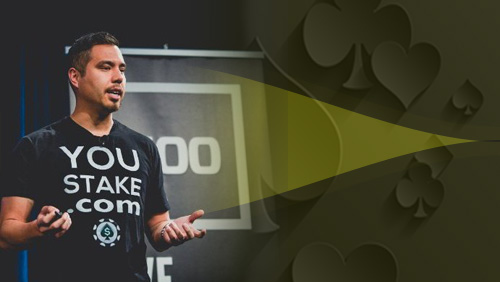 Lee Davy sits down with the CEO of YouStake, Frank DeGeorge, to talk about the growth of his company, licensing and moving into new verticals.

Do you ever catch yourself driving down the road when you suddenly think of the greatest invention in the world? You press the Siri button on your iPhone. It doesn’t work. You pick your iPhone up and create a voice message to remember your idea and then never do anything about it?

I do, and one of those ideas that lies in voice recorder heaven was the one where I was going to create a company to manage staking in poker.

I approached someone who is smarter than me to ask for an opinion.

“It will never work. It’s too complicated.”

So I ignored it – it’s not like I was going to change a habit of a lifetime and do anything about it.

But Frank DeGeorge did.

He created YouStake, and they are doing very well.

Who is Frank DeGeorge?

“When you look at my background it has been with the military, gaming and finance. I spent 10-years in the army. I enlisted when I was 18. I went to school at the University of Central Florida and studied finance, and when I graduated, I became a commissioned officer in the army.

“My first real job was in the National Guard where I was a lieutenant in finance, and I was also a registered representative with Merrill Lynch in New Jersey. I spent some time in Kuwait and Qatar. I ran the finance office in Kuwait at the height of the Iraq drawdown so at one point we had thousands of soldiers coming through my office.

“After Kuwait, I went from one desert to the next when I landed a job in Las Vegas. I went through the management training program at MGM Resorts International. I spent 12-months going through all functions of finance: the cage, the CFO office, anything.

“Next, I took a role that took me to DC where I am today. I was running the budget for the Army National Guard recruiting retention program. It’s a $400m a year budget, and I was in charge of everything from operational costs like cell phones and transport to sports marketing contracts. In 2015 we officially launched YouStake and then in 2016 I have been working on this full time.”

How did the idea come about to launch YouStake?

“I don’t think it was one lightbulb moment. It was a culmination of a number of things. I was in the gaming business and became good friends with professional poker players, and they were going through this very old school, behind closed doors, handshake deals looking for money in what we call staking deals. Also being a huge fan of poker and watching the WSOP on TV and hearing them saying that this person who was going to win a million bucks only had a small piece of himself. I was wondering what does that mean, and I wanted to learn more about it. We created the first minimal viable product of YouStake back in June 2015.”

What were the complications trying to create a company like YouStake?

“Staking has been around for as long as the game itself, and not just poker, any sport where capital is required. When you look at our technology we are solving a lot of things: access – people are being connected from all over the world. Payment processing – we used to have to figure out how to exchange cash. Contracts – is it necessary to have something signed that the backer and player understands what is owed. And how do you track the results? How do you get the money when they win? One of the most crucial pieces is the tax process. Players don’t have to pay more than they should, and backers are paying what they won profit on.”

Who were some of the poker players you knew?


“I am a very good friend of Anthony Zinno. He is an investor in our company and an advisor. Greg Raymer, Mike Leah, Jamie Gold – they have an involvement as well.”

What are the major milestone growth moments?


“Starting with launching our minimal viable staking product. The website today is much different to June 2015. Then throughout the course of the next few months acquiring some of the top players and talents on the platform and I have mentioned some of their names.

“Then the next thing was getting accepted in 500 Start-Ups. 500 Start-Ups is one of the most prominent start-up accelerators in the world. There were over 1,500 applicants, and 50 companies went through the program. They offer you advice, seed investment and over a four month period you work towards presenting your product to a group of investors.

“Then when I look at our growth, year on year, we have grown more than 4x in all of our metrics in the past year. Regarding user growth, revenue generation and gross merchandise volume – essentially the amount of staking that goes on the platform.

“Then came beta testing our next verticals. We knew poker was a good test case, but we want to take it to other skill sports verticals. We have been testing pay-to-play eSports tournaments. And this month we released some products that focus on a top-down approach – the top being the tournament organisers and giving them a tool where they can track the number of registrations coming through and offering players additional ways to raise money with new crowdfunding techniques and provide more entertainment to their fans.”

How can poker players offer their fans more value?

“Picture your favourite poker player. Imagine if you had the ability not just to invest, but you also to interact on a different level than Twitter or watching them on TV. A player can say if you donate a certain amount of money I could offer you a private dinner. Or if I am an aspiring poker player and am willing to back that player I might want some training sessions. It opens up more revenue streams for the players and more engagement for the fans. I believe it helps grow the industry as a whole.”

Crowdfunding Portal License – what does it mean?

“It’s taking the idea of using the crowd to raise funds. Some of the most prominent organisations are Kickstarter for the more reward-based incentives. On the donations side, you have GoFundMe. When you look at crowdfunding portals, there are not that many that go through the licensing process because there is a third type of crowdfunding that staking is directly related to, and that’s equity crowdfunding. It’s more akin to investing. Just like other investing platforms, there are regulations that need to be followed, and that’s the first step for us to provide a safe environment for our staking platform.”

Can you talk about your relationship with Rivalcade


“When you look at eSports there are tournament operators, platforms and the players and the fans. In the tournament organisers space Rivalcade is one of the newest ones. When you think of poker you have companies like Caesars who own the poker room, then the organisers like the WSOP. Our partnership with Rivalcade gives us access to some of the tournaments that are running on a regular basis.

“When you look at eSports versus poker, eSports is essentially either free-to-play or smaller buy-in events. In poker we know this as the $365 and $565 entry at the low end and the higher events are $100k upwards to a million. We think eSports will grow in that direction in the future.”

What other verticals work well for YouStake?

“We looked at poker as our test market, and we are still developing that vertical. Anything that has a capital requirement and some size of prize pool component. It could be applied to any sport, but for us, our focus is the non-traditional type sports. Not the soccer, NBA and NFL but the golf, tennis, and anything that individuals play. There are some interesting verticals that are popping up that we will announce soon.”

If you want to invest in poker players, eSports athletes, or anything other skilled sport then head over to YouStake and check it our for yourself.