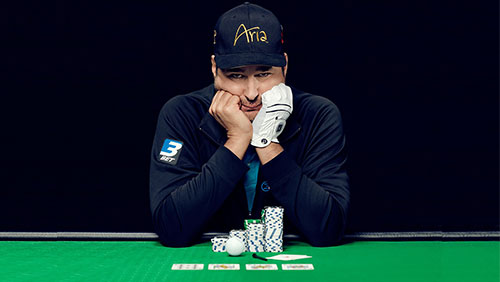 The world’s leading sports staking platform, YouStake, has hit the big time after signing Phil Hellmuth as an ambassador and advisor, and he immediately puts 60% of his World Poker Tour action up for sale.

I’m going to have a Dwayne Johnson style shout out here.

“It doesn’t matter what you think of Phil Hellmuth Jr…”

The 14-time World Series of Poker (WSOP) bracelet winner will remain as synonymous to poker as gravy is to a UK Sunday roast until the day he joins the phantoms who spend their days looking up at the roots of grass.

When Fedor Holz signs for partypoker, it’s a big deal. Holz represents the present and future of poker. Let’s fast-forward a few years to a time when kids are not blasting kids away with shotguns, and the US have legalised online poker. You can guarantee Hellmuth is wearing a patch. He might not be the future of poker, but he is still the present, and he will always be a legend of the past.

If you don’t believe me, then walk up to a random recreational poker player and ask them to reel off the first few names that come to mind when it comes to the princes and princesses of poker. Hellmuth gets a shout out every time. And that’s why it’s a great piece of business by YouStake in obtaining his signature.

YouStake is a digital platform that allows sportsmen and women to sell action to interested buyers. Unlike StakeKings (that focuses on poker and Daily Fantasy Sports), YouStake specialises in a broader range of sports including tennis, golf and more niche activities like Drone Racing.

News of the partnership emerged via a Medium post written by YouStake’s CEO, Frank DeGeorge. The piece explains that Hellmuth will act as both ambassador and advisor.

Doug Polk – get that man Hellmuth on your cryptocurrency YouTube Channel. According to DeGeorge, one of Hellmuth’s tasks is to help YouStake grow as a business through his advice on ‘blockchain development, potential Initial Coin Offering (ICO), and sports segment expansion.’

The YouStake website does have a page dedicated to ‘ICO’ consisting of an email list where you can sign up if you want to be involved in a YouStake ICO.

I’m not sure if this is a sign of the times, or a stunt to promote his arrival, but Hellmuth posted 60% of his $10,000 World Poker Tour (WPT) LA Poker Classic (LAPC) Main Event buy-in on YouStake. 72 people bought the lot, via 120 pieces, on the same day he posted it.

The thing with Hellmuth and his appeal to the recreational players and the brands he represents is few of his fans care or know about his recent live results. When they see him. When they hear his name. They think, ‘winner’.

Uber Driver Not a Fan

There is at least one person who doesn’t think Hellmuth is a tiger. A female Uber driver recently posted on social media saying that the 14-time bracelet winner was ‘privileged’ and never left a tip.

According to the post, Hellmuth dared to have the heating on through the entire journey, kept the interior light on so he could read his phone and talked incessantly about his million dollar book deal.

The post ended up doing the rounds, and there was almost universal support within the barricades of the poker community with most people stating that Hellmuth is one of the kindest people you’ll ever meet.

I have to concur.