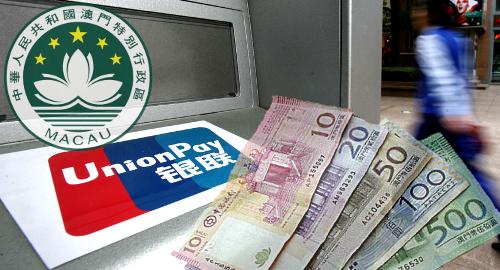 On Friday, the Monetary Authority issued a statement saying it had halved the amount that UnionPay card holders could withdraw in a single transaction, but that the daily withdrawal limit would remain at its previous level. A spokesperson said the reduction was “meant to increase our supervisory efforts on ongoing banking operations.”

The change was reportedly sparked after organized groups lined up at ATMs with stacks of UnionPay cards and withdrawing the maximum daily limit on each, taking out a total of MOP 10b in just the month of November. The SCMP’s number crunchers figure this represented 33k individual maximum withdrawals every day for 30 days. The Monterary Authority neither confirmed nor denied these reports.

In a separate statement, China UnionPay said its policies on international cash withdrawals on cards issued on the Chinese mainland “remain the same” and the daily withdrawal limit of RMB 10k and the annual limit of RMB 100k imposed this January still applied.

Views were mixed on how much the reduced withdrawal limit would have effected Macau casinos, with Sanford C Bernstein analysts estimating that “only a fraction of the ATM withdrawals are tied to amounts over the new limit and an even smaller fraction would wind up as mass [gross gaming revenue].” Customers who did rely on the ATMs “will likely find alternative ways to finance their gaming activity.”

That bullish sentiment wasn’t shared, at least not initially, by Melco Crown Entertainment’s Lawrence Ho, who said that if the original reports were true, “it would be a blow to the industry in Macau.”

But Union Gaming issued a note saying it continues to “steadfastly believe the government (both mainland and Macau) are not targeting the gaming industry. Both governments want to support the ongoing mass market recovery rather than implement policies that might derail it.”