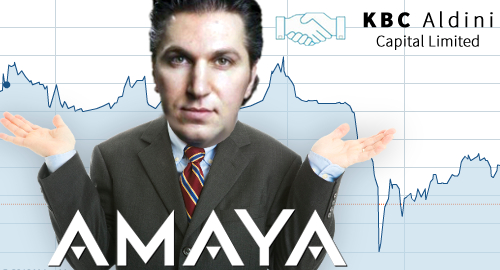 On November 14, the Montreal-based Amaya announced that it had received an all-cash C$24 per share offer from Baazov (pictured) to acquire the company’s outstanding shares. Baazov filed papers with the US Securities and Exchange Commission (SEC) claiming that he’d lined up $3.65b in commitments from four investment firms, including KBC Aldini Capital Ltd.

On Monday, KBC Aldini CEO Kalani M. Lal informed CalvinAyre.com that it wished to clarify that “neither KBC Aldini nor any of its related entities are involved in this transaction.” On Tuesday, Canada’s Globe & Mail newspaper reported that KBC Aldini had filed a complaint with the SEC regarding Baazov’s claim.

The Aldini statement raises all sorts of questions regarding Baazov’s bid, including whether the offer is still viable without Aldini’s contribution. It seems hard to conceive that Baazov would have included Aldini in his filing had he not reached some understanding with the firm, yet Kalani Lal told the Globe & Mail that he didn’t even know what Amaya was.

Shares in Amaya, the parent company of online poker giant PokerStars, are currently down around 6% at time of writing after enjoying a massive spike following last week’s announcement of Baazov’s latest takeover bid.

Given that massive spike in Amaya’s share price, the timing couldn’t be worse for Baazov, who holds a 17.2% stake in the company. Baazov is currently under investigation by Quebec securities regulators for suspected insider trading by Baazov and a number of associates, including his older brother Ofer/Josh Baazov.

Baazov is accused of receiving kickbacks from his associates for giving them advance word of Amaya transactions that were likely to boost the company’s stock price. Baaozv has pled not guilty to criminal charges stemming from similar allegations related to the 2014 acquisition of the Rational Group, PokerStars’ parent company.

Typically, a law firm has already announced it’s ‘investigating potential securities fraud or manipulation claims” involving Baazov. The Boston-based firm of Block & Leviton LLP is asking investors who may have purchased Amaya shares between November 14-22 to contact them for “questions about your legal rights.”