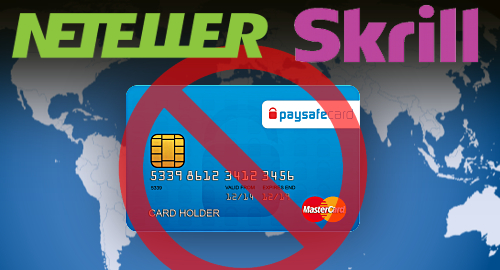 Online payment processors Neteller and Skrill will block the use of prepaid Mastercards in over 100 countries starting November 25, a shift that will likely lead to greater acceptance of Bitcoin technology.

The Paysafe Group (formerly known as Optimal Payments), which controls the Neteller and Skrill brands, informed customers last week that it was discontinuing prepaid Mastercard service in over 100 countries. The change in policy doesn’t apply to countries in the European Single Euro Payments Area (SEPA), which includes all 28 European Union member states, while Iceland, Lichtenstein, Monaco, Norway, San Marino and Switzerland will also get a pass.

The prepaid Mastercards were popular among online gamblers but the change will prevent gamblers in non-SEPA countries from making instant withdrawals from their online gambling ewallets. Paysafe’s message to its customers attempted to soften the blow by explaining that they could continue to withdraw balances to their bank accounts as well as transfer funds between other Skrill/Neteller accounts.

The list of affected countries includes some of the world’s biggest gambling markets, including Australia and Brazil. For the time being, the new policy doesn’t appear to apply to North American countries, including New Jersey’s regulated online gambling market, where Paysafe has been processing payments since late 2014.

Paysafe customers in Russia and China have reportedly been told that they can continue to use their existing prepaid cards until they expire but new cards won’t be issued. Skrill’s website was temporarily blacklisted by Russia’s communications regulator this summer due to the processor’s links to unauthorized online gambling sites.

Paysafe has yet to publicly disclose the precise rationale behind the new prepaid Mastercard restrictions. Regardless, these restrictions, which came shortly after US-facing betting operators reported increased scrutiny on the use of Visa cards, will add further momentum to online gambling operators and customers’ growing embrace of the Bitcoin virtual currency as a viable, safe and speedy form of moving money on and off gambling sites.