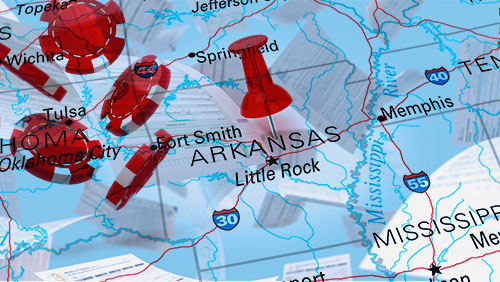 Three Arkansas counties will generate a combined $122 million in annual tax revenue if the state chooses to legalize casinos in the state.

This was the findings of Oklahoma-based Economic Impact Group, which conducted a study on the effect of legalizing casinos in Arkansas just a month before residents cast their vote on the proposed constitutional amendment in November. The study was commissioned by

“Based on our findings, we believe the passage of Issue 5 will result in significant Arkansas investment, creating or supporting thousands of jobs while providing a new source of tax revenue for the state and local communities,” economist Kyle Dean said in a statement released by the pro-casino group , according to the news agency.

The study, paid for by Arkansas Wins in 2016, also found that 3,400 construction jobs will be made available in three casinos proposed in Boone, Miller, and Washington counties if voters approve to amend the state constitution.

According to the report, Cherokee Nation Entertainment is poised to operate a casino in Washington County should voters approve the referendum. It would be recalled that Cherokee signed an agreement with Arkansas Wins in 2016 to build and operate a casino in the county.

It will be historic for the tribal group since it will be the first of its locations where they will be constructing a casino off tribal land.

Opponents of the ballot measure, however, criticized the study as “political propaganda.”

“This ‘study’ is political propaganda and not worth the paper it’s printed on,” Protect Arkansas Values/Stop Casinos Now Chairman Chuck Lange said in a statement.

Republican Gov. Asa Hutchinson, who opposes the measure, said he believes it’s “far from” being about job creation.“This issue will most certainly have a negative impact on our communities, and it will no doubt create out-of-state monopolies,” Hutchinson said in a statement. “This is a bad deal for our state.”