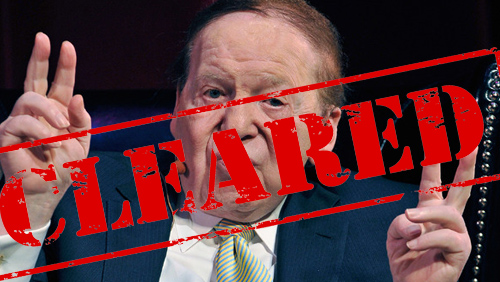 That was the decision that the Federal Election Commission came out with in response to allegations that the Las Vegas Sands Corp. chairman had used funds from foreign sources via his casinos in Macau to make contributions to federal elections.

The complaint against Adelson was filed by the nonprofit watchdog group Campaign for Accountability (CfA) in 2015, following the indictment of Chinese billionaire Ng Lap Seng who was caught smuggling $4.5 million into the United States. The watchdog alleged that Adelson’s contributions were largely made up of “illegally laundered foreign funds” derived from Chinese crime groups.

The group singled out Adelson’s business connections to Cheung Chi Tai, who was identified in the past as a leader of a Hong Kong triad group. Cheung, said to be a prime figure in the Neptune Group, is facing charges of money laundering in Hong Kong.

But according to the FEC ruling, “the available information… does not support drawing such conclusion.”

CfA already retracted its allegations, including Adelson’s links to organized crime groups and prostitution, and apologized to the tycoon for “any inconvenience or embarrassment” he suffered.

Adelson is known as a major Republican donor, spending as much as $150 million on campaigns in the 2012 election cycle, including over $98 million contributions to 34 candidates and political committees. The gambling mogul was more frugal this time around, spending about $1 million—so far—in the current election cycle. Of this amount, FEC documents showed $18,300 went to presidential campaigns of Republican hopefuls who have since dropped out of the race.

After holding back from picking a candidate during the primaries, Adelson has signaled that he would back newly-anointed Republican presidential nominee Donald Trump. This is good news for organizers of the super PACs that are “desperate” to attract large-dollar donors to finance Trump’s presidential bid.