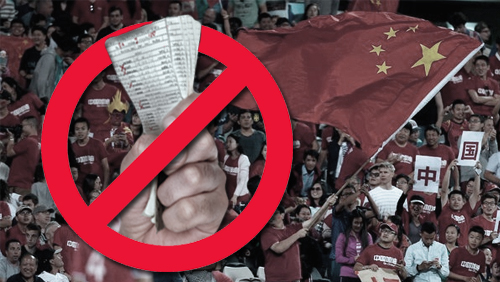 Football fans in Hong Kong will be able to watch the Chinese Super League’s new big-money signings in action, but don’t bet on them taking a punt on the matches.

The Hong Kong Jockey Club told Mail Online that it does not plan on offering bets for any CSL matches, hinting fears over the league’s “transparency” and integrity.”

In an email sent to the news outlet, a Hong Kong Jockey Club spokesperson said the club takes into consideration several things for its match selection process, including “information transparency, integrity and competitiveness of football matches” in order to “safeguard the interests” of its customers.”

The league recently grabbed the attention of football fans around the world after wrapping up a record spending transfer spree worth an estimated €331 million ($365 million), outstripping the English Premiere League’s €253 million outlay in January, according to industry website Transfermarkt.

A report from the South China Morning Post stated that the high-profile signings include Atletico Madrid’s Jackson Martinez, who joined Guangzhou Evergrande for a reported €42 million; Brazilian Alex Teixeira, who joined Jiangsu Suning for €50 million; and Gervinho, who will play for Hebei China Fortune for an €18 million paycheck.

Football in China has long been riddled with match-rigging and bribery controversies, but Chinese sports authorities have already sought to clean up the game in recent years. The Chinese Football Association fined 12 teams and penalized 58 officials, players and referees in 2013 in connection with their alleged involvement in match-fixing and bribery.

Meanwhile, Sportradar, which was tapped to monitor Chinese football matches for suspected match-fixing, believes CSL’s recent influx of cash shouldn’t be a cause for concern.

Alex Inglot, director of communications and public affairs for Sportradar, told the South China Morning Post: “We wouldn’t see [the money flooding in] as a concern, what might be a concern is if players are not paid or paid irregularly—but I haven’t seen reports of that around what’s going on with the evolution [of football] in China.”