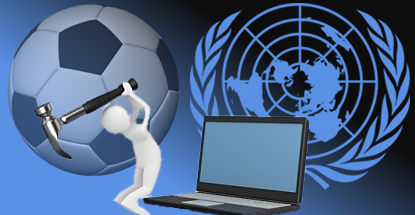 New York bookie Joseph Ruff has been sentenced to 41 months in prison for his illegal sports betting activity.

The 32-year-old Ruff, who was arrested by federal authorities last June, pled guilty in December to charges of illegal gambling, money laundering conspiracy and extortion. The credit betting ring took wagers via password-protected websites while processing $76m in betting handle via FedEx, bank deposits or in person at the Marina Restaurant and Bar in Charlotte.

Ruff’s case made headlines after word leaked that National Hockey League player Thomas Vanek was among Ruff’s clients. Vanek wasn’t a particularly good sports bettor, at one point endorsing a $230k New York Islanders paycheck to partially cover his gambling debts. There’s no evidence that Vanek ever bet on NHL games with Ruff, so we’re sure this next item is completely coincidental.

MATCH-FIXING IS ONLINE GAMBLING’S FAULT
Wednesday saw the United Nations Office on Drugs and Crime (UNODC) put down the bong long enough to announce an anti-match-fixing partnership with the International Center for Sport Security (ICSS) In another completely random and not at all coordinated event, Vietnam’s football federation chose Wednesday to announce the lifetime suspension of six players found guilty of match-fixing last year.

Speaking at the UN Congress on Crime Prevention and Criminal Justice in Doha, Qatar, UNODC exec director Yury Fedotov said match-fixing was “an issue of public trust” that required ‘tailor-made legislative responses and effective investigative powers.” The UNODC and ICSS plan to expand their existing efforts with “a particular focus on capacity building and the development of technical tools.”

The UNODC believes match-fixing can be “linked to the rise of online gambling, which increased the number of people with direct economic interest in sport competition.” (Just as the ability to order Tootsie Rolls online is directly responsible for the obesity crisis.) The UNODC says illegal sports betting and match-fixing “have grown into a huge transnational business worth billions of dollars.”

Any association with ICSS seems to invite outsize projections, such as the much criticized report last May that claimed sports betting enabled criminal elements to launder over $140b per year. ICSS is based in oil-rich Qatar, where the number of high-net worth individuals rose 300% last year, so they probably no longer recognize numbers lower than a billion.

Jay had previously told his panel audience that global betting volume was only one trillion. However, Jay told AFP he’d used the lower figure “because I can just about get away with it without being laughed off stage.” Jay wasn’t always so laughter-phobic, having declared last June that betting on the 2014 FIFA World Cup with anyone other than the HKJC was a “blood crime,” which had sports bettors rolling in the aisles.

Jay told AFP that tennis and cricket each generated 12% of the global betting pie but 65% was wagered on football, with the bulk of football wagering taking place in Asia. Jay said the Chinese market alone might wager up to €1b on a football game, particularly if the games are on prime time television in the Asian market.