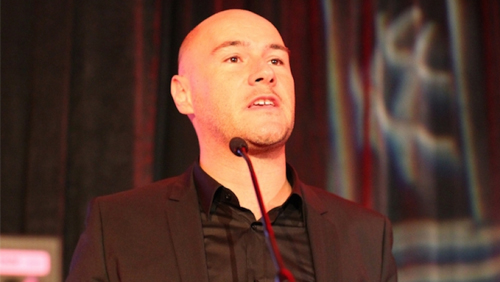 Lee Davy sits down with the Global Poker League founder, Alex Dreyfus, to talk about the recent criticism doled out on Twitter relating to player contracts.

If I am ever in a urinal next to Alex Dreyfus, I have no doubt, that should I glance a look at his never-regions, I will discover that his balls are made of gold.

He can do no wrong.

He is the saviour of poker.

But not everyone agrees with my lofty opinion of the creator of the most innovative poker concept since I learned to play cards. And last week, the Frenchman was on the wrong end of a showing of rare angst from a few people, most notably, the World Series of Poker (WSOP) bracelet winner Tristan Wade.

What was the beef?

Wade decided to get the microscope out, flick away the spit and the eyelash, and replace it with a copy of the Global Poker League’s (GPL) player contract.

It’s safe to say he didn’t like what he saw.

It’s safe to say he shared his thoughts.

I asked Wade if he wanted to talk further about his findings, but he politely declined. Dreyfus on the other hand sat down with me for a good 60-minutes where we talked about nothing but the GPL, its players, and their contracts.

*This transcription is an abridged version of the interview. I highly recommend you listen to the full 60-minutes audio.

How to you absorb criticism?

“It’s very difficult. When you are a en entrepreneur you build something from scratch and you refer to the thing you are building as your baby. When you have someone who attacks you out of context it’s a bit frustrating.

“Usually, I don’t engage. You can never win a Twitter debate. How can you interact through 140 characters? It’s so fast you don’t have time to put forward your explanation.

“So for that one, for 24-hours I did not say anything. My wife who is a lot smarter than me, told me not to engage, and so I did not. Last night, I did. I was a little bit frustrated and tired about the tone from people who don’t know what they are talking about. They take the contract out of context, they don’t ask me what we meant in the contract and they do not know the GPL project and what we are trying to achieve.

“I was a little bit rude in one message which was misunderstood – lost in translation as I used to say. I asked Tristan and Paul to do a Skype call. We have nothing to hide. We made the contract public. I suggested they could Twitch the meeting. Tristan said yes, and then a few hours later, he said he didn’t want to do it.

“It makes me even more frustrated. People say a lot on twitter but when you suggest discussing it more professionally, in a better forum, they don’t want to do it.”

Has anyone else come to you and complained about the player contract?

“We had a manager contract, and we have 12 managers. They all recieved the same contracts. A few of them wanted to change a few things and we met lawyers to lawyers and changd a few things.

“There is one very famous player that is very engaged in different businesses that wanted to change some stuff, and wanted to make sure there was no conflict, so we did it. There was a player from the entertainment industry who wanted a clause that if he got a role in a movie and that the movie was incompitable with his GPL function could we add a clause that he could leave at any time – of course.

“We are not evil. We are spending $5m to create a platform to promote players and poker. There are players who don’t want to be a part of it, there are those that don’t but support us, and there are those who don’t give a shit what we do., and that’s fine.

“The people who complain the most are the ones I don’t interact with a lot. They don’t understand the background regarding what we do. We try to build a big relationship with the biggest players in the GPI. The relationship is, if you have a question or a thought just ask.

“One player asked me today could they have a deal with a watch company. We don’t have a problem with that because the watch is on your wrist and not something you would have on your jersey. There is no taboo. It’s a matter of engaging in conversation. Of the 203 people who registered we had 5-7 adjustments relating to their individual needs. The rest of them don’t have to sign it if they don’t agree with it.”

Did anybody refuse to sign it, who wanted to compete?

“No. The contract is a protection for the player and the company. Wha are we doing? We are building a framework. We are building a racetrack. Think Formula One. We are putting 12 cars on it (the 12 franchises), we are ptuting 12 drivers int eh cars (12 managers), and we also put the players in those cars.

“We put cameras on that racetrack. We build relationships with media groups to distrivute the coverage of the events. We build an engaeent with sports marketing and advertising agencies to get sponsors not to go to the driver but the car.

“To build a platform like that and to protect our investment, and to ensure it works, we had to build and bind the relationship between the players and the league. We need to do that.

“We had to build a foundation from which we would evolve. All year long we will have these 12 cars racing after each other and all the media are going to make stories about these 12 cars which are going to race these cars and the players within them. This is how you build exposure, engagement, and once you have done that you can engage with sponsors.

“The truth is sponsors don’t give a shit about poker because right now the platform that exists is not strong enough to give them exposure. I have read tweets where people have said its not acceptable that GPL are going to make all the money through sponsorship and revenue.

“Guys, which sponsors are we talking about? What revenue? Be pragmatic. There is no money coming into poker. We are building something that might attract money. Remember one thing, the sponsors don’t buy a player. They buy an exposure, an activation, so you need to be the league who is dedicated to that and not the other way around.”

Tristan asked a question on Twitter: “Do You Want to Promote the League You Are Playing in, or Promote Yourself?” Surely, You Are Promoting Yourself by Playing in and Promoting The League?

“Being realistic, I am not coming from a player’s perspective. I am coming from a business and marketing perspective. What I am going to tell you is based on my interaction with the CEO of WPP, the largest media agency in the world. I spend my last 2-3 years talking to people much smarter than me who work in the marketing space to understand their needs and fit their needs.

“Is it more interesting to promote Tristan as a player or promoting the league? If you promote the player you do not give the sponsors want. You as a player involved in the WSOP for example. You cannot provide a guarantee you will be exposed. What sponsors want, and what marketing agencies want, is how can they activate a brand by sponsoring one players and sponsoring New York Rounders? It’s less risky for them to sponsor New York Rounders.

“We provide a package to them. This is something the player cannot provide. That’s why it makes sense to be apart of the GPL. Marketing Agencies and advertising agencies have an appetite for teams and GPL, not players. We are a marketing company not a syndicate of poker players.”

Other matters we discussed during the podcast included:

• Why the GPL didn’t include players views when the GPL contract was created.

• What players the GPL hired to give advice and insight into the structure of the GPL, in particular distribution of the prize pool.

• Discussion on merchandise and why it will be more team centric.

• Why players won’t make vast amounts of money during the first season.

• How to provide exposure for sponsors investing in the GPL