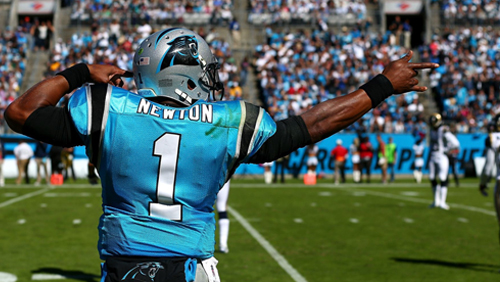 Cam Newton is waging an impossible war this week, and it’s not even against the Denver Broncos. Instead, he is facing an uphill battle against race relations within the NFL. Most of it is from racist idiots on Twitter, but a lot of it is being perpetuated by the media.

This particular frenzy is popping up at an opportune time. It’s black history month. Some girl I used to have a crush on from Clueless raved about how we don’t need to celebrate such an occasion. So naturally, people are going to gravitate towards the fascination that Cam Newton is a black quarterback (or African American if that’s what he prefers).

The question isn’t about black quarterbacks. It’s more so about running quarterbacks. Well beyond that, it’s about whether or not the old guard of the NFL is ready to accept that a new type of athlete could potentially play the position.

I’m not attempting to strafe from the argument about race. I made a point last week that discussions over “mobile quarterbacks” will often abandon a sense of dignity and begin to reek of racism. But we can attempt to alleviate the conversation if we look at this from an historical perspective.

“YOU CAN’T WIN A SUPER BOWL WITH A RUNNING QUARTERBACK”

The long standing argument against mobile quarterbacks winning Super Bowls is really selective. The general idea makes sense. Running quarterbacks will bank on instinct instead of going through their reads. They make everyone else on offense generally worse by straining the duties of the offensive line, while underutilizing the other skill players.

But here’s the thing about running quarterbacks: they just require the right coaching. It’s like anything else on the field. Players bring talent, coaches mold that talent and shape it in to something spectacular. This is how player development works.

Where the process gets mucked up is when coaches try to cram square pegs in to round holes, or when players like Colin Kaepernick get coached by morons like Jim Tomsula.

You also can’t just idly argue that mobile quarterbacks can’t win Super Bowls because they already have. It’s a small faction of the Super Bowl winning quarterbacks, but it’s there. And the list below doesn’t even factor in shifty quarterbacks like Ben Roethlisberger, who scramble but don’t gain a ton of yards on the ground.

That’s not a great track record for running or mobile quarterbacks in terms of championship success. However, it does tell a very revealing story about how the shiftiest of passers can eventually become something special.

You can win a lot of games and make a ton of highlight reels with running quarterbacks. You can even get very far. But you might not be able to win a Super Bowl if your quarterback’s only strength is running the football.

The most rushing yards a quarterback has ever accumulated in the Super Bowl is 64 yards, a record held by Steve McNair who lost to Kurt Warner. That’s a fascinating and revealing trend. It’s also a record that Cam Newton could very well break this weekend.

Kaepernick had a pretty good day through the air, completing 16-of-28 passes for 302 yards. It’s a day similar to that of guys like McNair or Young, who went from gunning on the ground to rifling through the skies when the Lombardi was an arm’s reach away.

It’s frustrating that the argument actually holds weight but the numbers are there, and a 50 year sample size is big enough to validate things to a certain extent.

The problem is that no team can win a Super Bowl if their team sucks or if their quarterback can’t at least pass the ball at a relatively efficient rate. So guess what? It’s time to ask a different question.

ALL QUARTERBACKS NEED TO BE ABLE TO PASS THE BALL

For argument’s sake, let’s just say that running/mobile quarterbacks have won the Super Bowl, because Young and Elway already have. But let’s also agree on a stone cold truth: you can’t win with a running quarterback if he can’t also throw the ball really well.

That’s the case with Steve Young, who dropped 313 yards on the Los Angeles Raiders while amassing a whopping 6 touchdowns. It’s also the case with Elway, who’s a bit of a tougher conversation. Elway threw for just 123 yards in Super Bowl XXXII on 12-of-22 passes. He also didn’t throw a touchdown. All of that was forgiven/forgotten when he tallied 336 yards on 18-of-29 passes the next year at Super Bowl XXXIII.

Cam Newton not only picked up 636 yards and 10 rushing touchdowns this season, he also threw for 3,837 yards (16th) and 35 touchdowns on the year (tied for 2nd). There’s no question that he’s a weapon on the ground, but he’s also a force of nature through the air, especially when it comes to producing points.

To reiterate the point, Cam Newton is a quarterback who can run and throw. He’s a phenomenon. That’s why the 2/3 favorite to win Super Bowl MVP this year is raking in a ton of action at the book.

WHY IS CAM NEWTON DIFFERENT?

The first reason is that he’s fucking enormous. At 6-foot-5 and 245 pounds, Newton is the type of athlete that comes by once in a generation. He’s only missed two games in his entire career, possessing a LeBron-level of invincibility that’s simply never seen that often. The size definitely helps in this department.

Let’s also look at the above numbers and put a few things in to perspective. The most rushing touchdowns scored by a quarterback is 44, set by Otto Graham. Cam Newton has 43 rushing touchdowns in his career. He could break that record at Super Bowl 50, or at least tie it.

At the end of it, though, Cam Newton is just a singular entity. He’s not indicative of anything. It’s ridiculous to think that he’s indicative of anything other than himself. He’s an athlete that is once in a generation. You just don’t get a lot of quarterbacks that are that big, that invulnerable to injury, that good at running the football and crudely effective at throwing touchdown passes. It just doesn’t happen that often.

But it also doesn’t happen by accident. Cam Newton should be credited with a lot of his success, but so should Ron Rivera and the management team for the Carolina Panthers. They surrounded him with a bevy of players that helped support his particular talents, while crafting a destructive defense in the meantime (which is the same reason Denver is in the Super Bowl; everything is connected).

More than anything, Cam Newton was afforded time. Instead of being impatient, or anxious that this project wasn’t going to work, the Panthers just stuck with it. They recognized that Newton was worth taking a massive risk on, and the Panthers need to be recognized for this.

Washington abandoned Robert Griffin III after one of the most prolific seasons by a mobile quarterback. Cleveland just gave up on Johnny Manziel for entirely different reasons. Vick’s career is a whole different story. Cunningham came awfully close to Super Bowls, just like Fran Tarkenton, and both were able to notch special places in history regardless of their lacking championships.

The situation that the Panthers created is not unique. San Francisco did it for Young. Denver modified things for Elway. Reid completely structures things around Alex Smith the same way that he did for McNabb and Vick. Pete Carroll has done the very same thing for Russell Wilson, tailoring an out-of-pocket offense that is suited for his specific skill set. And look what’s happened: there are eight Super Bowls between those three guys. Cam Newton adds a ninth.

People may want Cam Newton to represent some type of movement for quarterbacks, but that’s like saying that the exception is now the rule. Very few things in life work that way.

To put this rhetorically, would you buck the tradition of a pocket passer and everything you think you know about football for a chance at 15 wins and a chance to win a Super Bowl? You would do it in a heartbeat.

THE EVOLUTION OF A POSITION

I’ve talked at length that the college system doesn’t seem to be churning out professional quarterbacks at an acceptable rate. We need one or two guys to start feeding in to the NFL every season to offset retiring players or injuries. That’s not a lot to ask for. It’s also not happening.

To get an understanding about how this works, you really just have to look at the Denver Broncos. They drafted Brock Osweiler (I’m assuming) for a purpose. Three years later, Osweiler proved to the entire world that he absolutely stinks. So instead of a young, up and coming quarterback, we’re watching an ancient Peyton Manning sling the ball conservatively all the way to a Super Bowl.

The fact remains that if Peyton Manning doesn’t come back this season, the Broncos aren’t getting to the Super Bowl. Same goes for the Carolina Panthers, who had Derek Anderson as the backup this season. If you lose your number one quarterback, you are probably shit out of luck. In a realistic world where we treat Brady like the anomaly that he really is, the best case scenario you can hope for is something like AJ McCarron for the Bengals (which wasn’t great).

The fact is that if the Panthers lose Cam Newton, they’re dead in the water. Same goes for so many teams. You can replace Tom Brady with another player that simulates what he’s physically capable of, but there’s no way he’s going to put up the same type of performances. We have to stop kidding ourselves that insulating a starter with a similar backup is an idea worth investing in.

Instead, coaches and teams have to be better at putting their quarterbacks in a position to succeed. Jameis Winston proved that he could run like a beast this year, when nobody expected it. It’s beyond irresponsible to shoehorn him in to some pass heavy scheme that doesn’t take advantage of his incredible gifts. Why would you leave that bullet wasted in the chamber if it’s going to help you win games?

If Cam Newton represents anything, it’s what’s possible if you properly cater a team to your best player. It’s not always going to work because there are 31 other teams trying to win a championship, but there’s more than one way to get to the Super Bowl. This is a league that rewards creativity even if it’s entirely resistant to the concept.

Teams have to start looking at the position differently. The Panthers certainly did and look where they are now. They bet that Cam Newton was going to be special, and that gamble paid off handsomely. They saw something special, something a little different and a chance to be a championship contender.