Home / Sports / The Many Gambles of Riverboat Ron Rivera 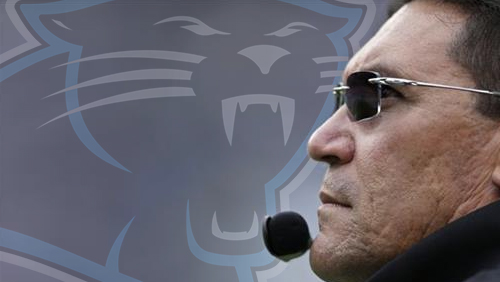 As much as I’ve touted Bruce Arians over the course of the season, there’s no doubt that Carolina’s Ron Rivera is destined to be awarded the AP NFL Coach of the Year for what he’s accomplished thus far. It’s a well deserved accolade for the man behind the top scoring offense in the league, and one of its most fearsome defenses. Would you believe that it would be the second time Ron Rivera’s been honored with this award?

I talked to a lot of people who both write about football and love the game as much as I do to see what they thought of Ron Rivera. The consensus was simple: not much. For a coach as accomplished as Rivera, he leaves a strangely small footprint on the mainstream consciousness.

In the Internet era, almost every coach as successful as Rivera has some sort of defining quality. Arians is a football genius. Belichik is stone cold with the media. Even a guy like Jim Caldwell is known for his dumb face.

There’s no such hot take on Riverboat Ron Rivera. Why not?

Rivera is often overshadowed by the big personalities on his team. Cam Newton is the face of the franchise without a doubt, and he’s often credited with imprinting his wild personality on this team. The same could be said of Luke Kuechly, the Defensive Rookie of the Year in 2013 and Defensive Player of the Year in 2014. Teammate Josh Norman boasts a brash charisma that steals headlines while his on field production has made him a Defensive Player of the Year candidate this season.

It’s a group of big time players who hog the spotlight that Rivera is more than willing to let them have. Maybe part of his shtick is to have none. Or maybe there’s more to it.

Super Bowl 50 will be Rivera’s third Super Bowl appearance. His previous two trips come as with the Chicago Bears, one as a player with that legendary 1985 team that trampled the New England Patriots in Super Bowl XX. The other as the defensive coordinator for the 2006 Bears team that lost to the Colts at Super Bowl XLI.

Granted, he was merely a substitute linebacker player in just his second year but he’d go on to start for a few seasons over a solid, nine-year career. Don’t worry, I know that probably sounds boring, but it’s a start.

Rivera ended up back in Chicago twelve years after he retired to coordinate the second-best defense in the NFL at the time – the 2005 and 2006 Chicago Bears led by Brian Urlacher (the all-time defense of the Ravens was tops). Lovie Smith gets a ton of credit, but Rivera’s defensive unit was the lynchpin of this entire team.

Indianapolis and Chicago played in Super Bowl XLI and Peak Manning went 25-of-38 for 247 yards, a touchdown and a pick. The ultra-conservative play calling of Chicago failed to secure them any momentum, and Rivera’s defense was getting roasted on the ground for 190 yards.

Rivera took over for John Fox (who was ironically replaced by Gary Kubiak in Denver) at the beginning of the 2011 season when the Panthers had a woeful 2-14 SU season. Hilariously, that wasn’t even the worst season in franchise history. They won a single game in 2001.

But losing that many games allowed the team to draft Cam Newton, who was taken just ahead of Von Miller in the 2011 NFL Draft. Hiring a new coach and simultaneously drafting a rookie quarterback are the fastest ways to reconstruct a team in the NFL. Carolina knew they had their quarterback after Cam took the league by storm in his rookie year, but Rivera was never a certainty.

In fact, he was nearly fired after going just 13-21 SU in his first 34 games. Even more startling, 14 of those losses were by 7 points or fewer. Rivera had only won two games within that margin over those matchups.

Something had to change. Either Carolina needed a new head coach, or Rivera had to find another way to win football games.

THE BIRTH OF RIVERBOAT RON

Honestly, I’m not sure if the nickname “Riverboat” was given to Rivera simply because of how he spells his last name. Coincidentally, it may be one of the most fitting nicks in the business.

Invariably, sometimes all you have to do to change your outlook is to alter one little thing. Rivera was getting hammered in the media for his ultra-conservative play calling, especially on fourth downs, where he was the least resistant to “going for it”. It’s one thing when Carson Palmer is your quarterback and you need a few inches, but when you have Cam Newton it should be a no brainer.

Over the first two years of Rivera’s tenure, the Panthers attempted the fewest fourth down conversions of any team in the NFL, and had the second-worst conversion rate over that span. Carolina went 8-of-19 for a 42% success rate on fourth downs.

For a team that’s just trying to be competitive, you have to tinker with things. The Panthers still hadn’t really found their identity at this point, but smash mouth football begins with aggressive play calling. So that’s what Rivera started doing.

Risk aversion is a time-honored tradition in the NFL, and it all started with Mike Lombardi. But you don’t win championships by playing it safe. Ask Mike Tomlin and Bill Belichik. As much as the NFL wants cookie-cutter everything, you have to be different.

In a 2013 interview with the Charlotte Observer, Rivera talked about the change in his philosophy. “Sometimes you play by the book and you miss opportunities. It’s been an enlightening situation for me. One of the things that I want to try to do is to make sure we are in the best position to win. And the other realization is kicking field goals is obviously not good enough.”

That last sentence is something the Denver Broncos should probably study as they head towards Super Bowl 50.

WHY A SHITTY 2014 WAS GOOD FOR CAROLINA

Just to tangent more than I usually do, we should probably explain why last year was so rough around the edges for Carolina, even though they appeared in the playoffs.

Looking back at Rivera’s tenure, the only glitch in the upward trending system is 2014, where Rivera and the Panthers attempted to turn Carolina in to more of a passing offense. It didn’t go well.

If we go “by the book” in quarterback development, then everyone has to become a pocket passer. It’s one of the most antiquated ideologies that we have in the NFL, and it’s crippled the development of so many players. In 2014, the Panthers and Rivera tried to make Newton in to more of a pocket passer using the droptastic Kelvin Benjamin. Of all players with 130 targets or more, Benjamin had the second-fewest receptions.

Benjamin is going to be a stud in the league because he makes plays, and nobody second guesses his talent. At least they shouldn’t. Even with his mistake riddled rookie campaign, the loss of Benjamin in the preseason virtually sentenced the Panthers to death. Carolina was a 40/1 longshot to win it all (via Oddshark.com), sharing the same odds as teams like Miami, San Diego and Chicago. You know – the “teams that have no chance but we like to pretend they do” contenders.

So what did the Panthers do? They turned Cam in to nothing more than an average pocket passer and returned him to the ground. Cam had just 103 carries and 539 rush yards and 5 scores on the ground in 2014. He upped those numbers to 132-636-10 this season.

In the process, Newton ranked out at the league median for starting quarterbacks in passing yards and attempts, ranking 16th in both. His 35 passing touchdowns were also absolutely phenomenal.

To think that this wasn’t Rivera’s doing is silly. But you also have to appreciate how much of a gamble this was for him as a head coach.

Rivera was never going to get away with using Kelvin Benjamin as a scapegoat the way Green Bay did with Jordy Nelson (for whatever reason). Not with Cam entering his prime and a mega contract, and not after three losing seasons.

He was there in 2014 when the Panthers’ season ended on a pass by Cam Newton. No matter how many touchdowns he’s thrown, and despite his unbelievable arm strength, nobody in their right mind should be trying to turn Newton in to the next Brees. They’re just completely different athletes and quarterbacks.

It’s no small thing to take a chance and turn yourself in to a run-first team in the modern NFL, especially with how idiots like Phil Simms treat running quarterbacks like they don’t deserve to be in the NFL. They do, and any notion comes off as flat out racist. You don’t hear announcers chastising Alex Smith for using his legs, do you?

If the 2015 edition of the Panthers didn’t work the way Rivera planned out, it was going to be an ugly scene for Rivera. But he had Cam, Stewart, a solid offensive line and a team that was willing to stack their chips behind the dice he was rolling.

Rivera had taken a big risk in his career before by adjusting his angle on fourth down conversions. He did so again by coaching the Panthers the way he knew they’d function best in spite of the overwhelming sentiment that you need a true, passing quarterback to win a Super Bowl.

All the while, Rivera has won 17 games this season, piled up 13 covers against the spread for his fellow gamblers, and done all of this with a stiff demeanor that belies his willingness to go toe-to-toe with jeopardy. He’s like that guy at the poker table that you just can’t get a read on. Maybe that’s why he wears those stupid polarized lenses.