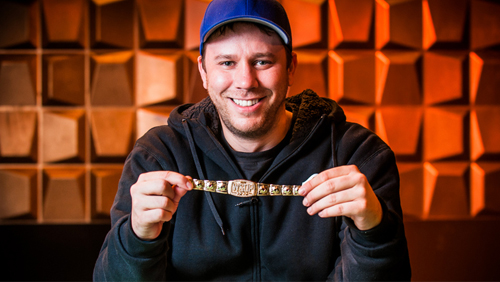 Kevin MacPhee has won the World Series of Poker Europe Main Event after defeating the Spaniard David Lopez in heads-up action at the Casino Berlin Spielbank.

MacPhee becomes the fifth American to win the WSOP’s premium European event, and in doing so prevented David Lopez from ensuring that the title would remain in Spain for the second successive year after Adrian Mateos took the title in 2014.

313 entrants each paid €10,450 to create a €3,067,400 prize pool. It’s the smallest field, prize pool and first prize payout in the tours eight-year history. MacPhee won’t be worrying about any of that old nonsense. He has now earned $5.2m in live tournament earnings, won two WSOP bracelets and a European Poker Tour (EPT) title. He has also won over $7m playing online MTTs.

MacPhee came into the final with a big chip lead, after eliminating Erik Seidel in seventh place. Andrew Lichtenberger and JC Alvarado seemed to be MacPhee’s most significant threats, with David Lopez, Kilian Kramer and Felix Bleiker having a lot of work to do to prise their way into contention.

Bleiker was out first. He moved all-in holding [Qs] [Jd] and David Lopez made the call with [Ah] [8c]. An ace on the flop raining down to ensure the stack of Lopez would grow, and that of Bleiker would crumble to nothingness.

MacPhee quashed any hopes of Germany winning a WSOPE Main Event title when he eliminated Kramer in fifth position. The German moved all-in, for seven big blinds, holding [Ah] [Td], and MacPhee woke up with [As] [Ks]. The dealer throwing more spades on the board than Home Depot, and Kramer was flushed out.

Lichtenberger came into this final table on fire with a string of impressive results, but his tournament would end in fourth. He moved all-in, for 16 big blinds, holding [Qs] [Ts], and MacPhee looked down to see a pair of queens in the small blind. He made the call and rivered a set for good measure.

JC Alvarado was left to concentrate on his punch up with Olivier Busquet after being eliminated in third spot. The Mexican got it in good AK

That little bit of look sent Lopez into the greatest moment of his young career with a 2:1 deficit, but he soon brought the action to an even keel. MacPhee would then take another slight lead before the final hand brought the festival to a close. MacPhee four-bet jamming with [Ad] [4d], Lopez calling with pocket kings and the American turning a wheel to break the Spaniard’s heart and hand MacPhee his second WSOP bracelet of the year.