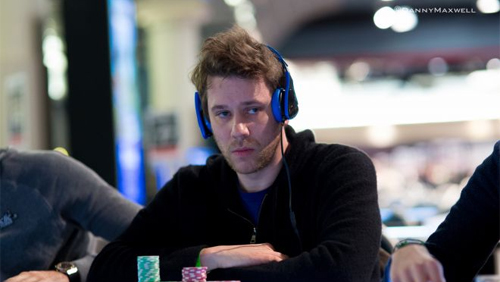 The 2015 World Series of Poker Europe final table has been set and Kevin MacPhee, Andrew Lichtenberger and JC Alvarado headline.

David Lopez opens the button for 65,000, Kevin MacPhee three-bets to 160,000 from the small blind and all eyes stare at the man sitting in the big blind.

Friend or foe, predator or prey, Seidel has been mixing it up with the very best tournament players in the world since 1988. He remains the one player from the old school who bounces around from continent to continent, tournament to tournament, playing and beating the newest stars from the past two decades. What a legacy this man will leave in this game.

Seidel tables the [As] [Ks], usually a great hand in any spot, but today MacPhee is feeling the vibe of champions. He turns over two red aces, and five community cards later, the eight-time World Series of Poker (WSOP) bracelet winner, has been eliminated on the bubble of the World Series of Poker Europe (WSOPE) Main Event Final Table.

MacPhee already held the chip lead prior to Seidel’s exit. When the action resumes tomorrow, that chip lead looks even more formidable. On top of that, MacPhee looks the business and has been playing like he is the business.

He made two final tables in the summer and converted one of them for his first bracelet victory. Only a World Poker Tour (WPT) title stands in his way of a berth in the Triple Crown Club. In August, he finished eighth in the €10,300 High Roller at the European Poker Tour (EPT) in Barcelona. All told he had pocketed close to $900,000 prior to this event. It’s his best year since winning his EPT title in 2010, and could even eclipse that depending on how the cards fall tomorrow.

It won’t be easy for MacPhee. It never is, especially in a €10,450 Main Event of this calibre. All five of his opponents are serious threats, but if I were going to single one of them out as the man most likely to break MacPhee’s heart, then it would be Andrew Lichtenberger.

For the second successive year, Lichtenberger has secured an annual live tournament haul in excess of seven figures, and that’s without counting the money he will pocket come what may tomorrow. He has won two $25,000 Aria High Rollers, finished 17th in the WSOP Millionaire Maker and 9th in the WSOP One Drop High Roller. He owns a gold ring, but he doesn’t own a gold bracelet. That could all change tomorrow.

It’s been an interesting few days for JC Alvarado.

He will start the final table third in chips, and is the current talk of poker town after agreeing to fight Olivier Busquet in a Mixed Martial Arts (MMA) contest in April. Busquet will be hoping that Alvarado’s mood doesn’t change if he can capture his first gold bracelet and pocket the €883,000 first prize. In August, Alvarado finished fourth in the €50,000 Super High Roller at EPT Barcelona for a $504,391 score. The man is on form.

It’s only fitting that the final table should include a German. Kilian Kramer will start in fifth position, and he too came into the festival on the back of a fantastic summer winning $325,034 for an 18th place finish in the WSOP Main Event. David Lopez and Felix Bleiker round off the final six.

Who is your money on?