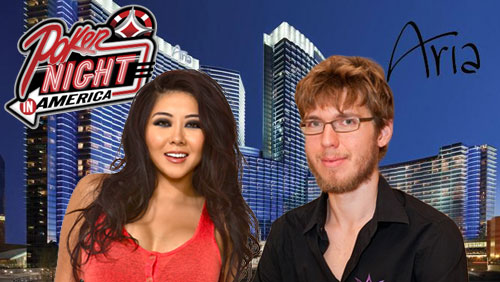 Andrew ‘Luckychewy’ Lichtenberger wins the second $25,000 High Roller of the summer at The Aria, and Maria Ho leaves the Heartland Poker Tour for a fresh project called Poker Night: The Tour.

Andrew ‘Luckychewy’ Lichtenberger likes Las Vegas. It’s where he lays his hat, but more importantly, it’s where he makes most of his money.

Lichtenberger has taken down the second Aria $25,000 High Roller of the summer, after beating Erik Seidel in heads-up action, pocketing $398,160 in the process.

The event attracted over 40-entrants. The previous night’s winner Max Silver was not one of them. A lack of sleep steering the Brit away from the $25k, and into the more reasonable $565 Colossus.

The heads-up between Lichtenberger and Seidel would last 90-minutes after Lichtenberger sent Justin Bonomo to the rail in third spot. According to The Poker Telegraph a deal took place at 7am in the morning, with Lichtenberger taking $360,090, Seidel taking $354,000, and $38,160 left to play for.

Seidel shoved the button holding [Qc] [8c], and Lichtenberger called holding [Ks] [Jc]. The [Qd] [Td] [5c] flop gave Seidel the lead, but an ace on the river gave Lichtenberger the straight, and the victory.

On Monday morning Maria Ho tweeted that she would no longer be working alongside the Heartland Poker Tour.

After two years as co-host/commentator for the HPT, I have decided to move on. I’m grateful for the experience and wish them all the best.

The two time WSOP Main Event Last Woman Standing has left to take on a new challenge, working alongside David Tuchman, in a new show called Poker Night: The Tour.

The show will be produced by Dustin Iannotti, the former Director of Content and Pro Marketing for Ultimate Poker, and will focus on the lives of the professional poker players once the chips are bagged and tagged.

Ho told BLUFF magazine that she couldn’t wait to get started on her show. “The way most poker players live their lives off the felt still fascinates me.” Ho told BLUFF. “We need a show that focuses on bringing these characters and stories to life while the cameras are rolling.”

The first season will begin filming in August at the Empire State Hold’em Championships at Turning Stone in Verona.