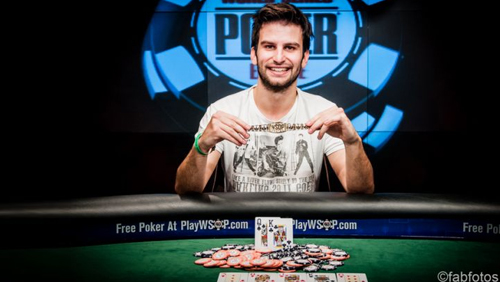 Tournament organisers like nothing better than a final table chocked full of established stars with a sprinkling of inexperienced thrown in for the David v Goliath effect.

When Event #8: Turbo No-Limit Hold’em w/Re-Entry reached the money; there were more Davids than Goliaths.

None of those Titans reached the final table. It was inconsequential. It still proved to be the most stacked final table of the series thus far.

Benjamin Zamani was making his third WSOP final table appearance of the year. He won a $1,500 No-Limit Hold’em (NLHE) event for $460,640, and also finished runner-up to Barry Hutter in the $1,500 NLHE Shootout Event for $174,771. He has also recorded final table appearances at the PokerStars Caribbean Adventure (PCA) and World Poker Tour (WPT).

The former WSOP Main Event runner-up, John Racener, was making his second WSOP final table of the year. He finished fourth in the $3,000 H.O.R.S.E event for $75,559, and Brian Hastings was making his third final table (he won his previous two: $10,000 Seven Card Stud Championship and $1,500 10-Game Mix Six-Handed).

The Global Poker Index (GPI) World Number One Byron Kaverman also made the final table. He was making his second WSOP final table of the year, and he also won his previous one earning $657,351 after topping the $10,000 NLHE Six-Handed Championship. Reigning WPT World Champion Asher Conniff rounded off an impressive list; this was his first WSOP final table of his career.

But there was one man who seemed to have the drive of a nation behind him. Georgios Sotiropoulos is one the greatest Greek players in their history. Prior to this series the Greeks had never won a single WSOP bracelet. By the time Sotiropoulos took his seat at the final table they had already won two. He made it three after beating Paul Tedeschi in heads-up action.

A three-way all-in situation saw Sotiropoulos eliminate Andre Lommel in fourth and Benjamin Zamani in third to set up that final skirmish. It was pocket fives for Lommel, [Ac] [Th] for Zamani and [Qh] [Jh] for Sotiropoulos. A queen on the river doing the damage.

The WSOP Live Updates team only recorded one heads-up hand in the blog. Tedeschi calling for his tournament life holding [Ah] [8c], after Sotiropoulos has jammed with [Kc] [Qs]. A queen on the flop and king on the turn settling things.

Sotiropoulos is now second in the Greek All Time Money list with $1.6m; Sotirios Koutoupas leads with $2m. It was his eighth WSOP cash, and his second final table. He finished eighth in a $1,500 Pot-Limit Hold’em event for a $18,529 cash. He also finished 12th in the Millionaire Maker for $90,650. His largest haul remains his runner-up finish to Julian Track at the EPT10 Main Event in Prague where he netted a $959,245 first prize.