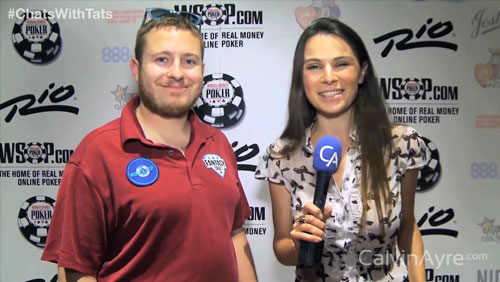 Multiple World Series of Poker bracelet winner Brian Hastings talks to Tatjana Pasalic about his “pretty fun” summer in this episode of CalvinAyre.com’s Chats with Tats.

Brian Hasting’s summer has been an eventful one, to say the least.

The 27-year-old pro poker player was the first to win two bracelets at the 46th Annual World Series of Poker (WSOP), picking up $133,403 after beating Rostislav Tsodikov in Event #39: $1,500 10-Game Mix. Aside from his gold bracelet collection, Hastings also walked away with $310,000 from side betting.

“It’s been a pretty fun one. I mean, I’ve won two bracelets. I had a bunch of side bets in the other events, too, and I’ve won bracelets, so it’s been a very good summer,” Hastings told CalvinAyre.com.

According to CNBC, Hastings made a wager before summer started that he would win a bracelet during the 68-event WSOP. Another poker pro, Jason Mercier, took him up on his offer and gave him a 3.3-to-1 odds. Hastings won a bracelet, and now Mercier owes him $165,000.

Hastings’s other set of side bets were in three parts, CNBC reported. Still against Mercier, Hastings won another $30,000 for coming in the top 16 of the 91 entrants, for making it to the Final Table, and for winning. He also made similar bets against other pros, but admitted he has yet to track them down.

“I have a little notepad app on my phone and you know, I haven’t really been tracking the summer round bets. I haven’t written them down. I think at the end of the summer when I’m less busy, I’ll go over it and figure out which ones I’ve won, which ones I’ve lost,” Hastings said.

But now, Hastings said his focus is on winning his third bracelet.

“Third is would be really more special. I believe three is the most anybody has won in the summer in the WSOP. I think there are only like five people who have done it so that would be really special,” he said. “Two is cool, but like there’s been a double bracelet winner I think every year for the last 13 (years) or something. Three would be really special I mean, what better way to do it than in one drop, right?”