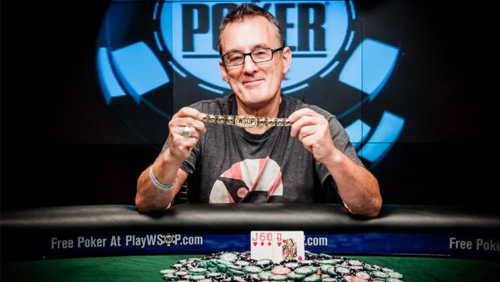 Barny Boatman has won his second World Series of Poker bracelet by beating Grzegorz Grochulski, in the heads-up phase, of Event #7: €550 Pot-Limit Omaha.

“Any mug can win one bracelet, it turns out any mug can win two!” Tweeted Barny Boatman after winning Event #7: €550 Pot-Limit Omaha at the World Series of Poker Europe (WSOPE) in Berlin.

It’s been a great festival for Boatman. His victory was his third cash of the week, including bubbling the €3,250 PLO 8-Handed event. That would have stung like a nettle. Winning Event #7 was his dock leaf.

The poker community recognised his achievements by awarding him the Lifetime Achievement Award at the Global Poker Index (GPI) European Poker Awards in 2013. Maybe they should have

waited a few years. They may have to re-issue the award in another decade’s time. There are more titles in this man. I can feel it.

Boatman beat 503 entrants in this one. There was €243,955 in prize money, and €54,725 will now pad the Brits account. He defeated the Pole Grzegorz Grochulski in heads-up action, after battling back from an inferior chip position.

The hand that did all the damage saw the pair get it in with Boatman holding [Qc] [Jc] [Td] [9d], and Grochulski holding [Kd] [Kc] [Js] [9h]. Boatman flopped two-pair leaving the Pole with only three big blinds. Boatman gobbled them up three hands later.

The final table also saw a member of the GPI Player of the Decade make an appearance. Shannon Shorr’s claim for a first WSOP bracelet, after 46 cashes, came crashing down after feeling the blunt force trauma of the eventual champion in third.