I have always had a soft spot for Barny Boatman. He doesn’t know it but the man saved my bacon the first time I ever worked at a live tournament. It was Vienna at the European Poker Tour (EPT). I was the rookie and was bricking it. I looked around the room and recognized nobody. Then like a beacon of light I saw Barny Boatman. I just stood by his table and wrote about him all day long. I turned the PokerNews coverage of EPT Vienna into a personal history of the game of Barny Boatman. 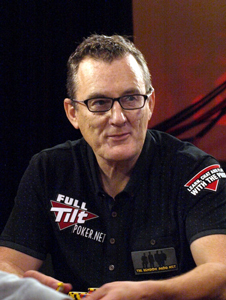 I was providing articles for Hendon Mob at that time and so I foolishly thought he would recognize me. I introduced myself on the break and eager not to make me feel uncomfortable he told me that he had read my stuff and thought it was good. I was beaming until he started calling me Davy. The next day it changed to Daniel. Bruce or Jackie I could understand…but Daniel?

He was about to experience one of the most memorable moments of his life. In 15-minutes time his brother, and best friend, Ross Boatman, was about to present him with his WSOP bracelet in front of a packed Brasilia Room.

“It’s still sinking in, and it’s also just occurred to me that on top of everything else I have now got a lot of money,” said Boatman before continuing, “People have been saying so many nice things and it’s kind of overwhelming and embarrassing really. But at the same time it feels really nice.”

The reason I like this guy so much is because of his authenticity. He’ll tell you if he likes you, and he’ll tell you if he doesn’t, and as I learned in Vienna he will even try and fake your name just to make you feel at ease. After the World Poker Tour (WPT) event in Baden, recently, my girlfriend and I bumped into him at the airport. I was starving and ordered scrambled eggs on toast. Barny and I struck up conversation while I waited for my food to arrive. Before long I was tucking into my food and noticed Barny wasn’t ordering anything.

“Would you like some of my eggs?” I asked.

So Barny Boatman ate all of my eggs. Every single one of them. That’s what I love about him. He’s just like the bloke you meet in your local pub. Top quality through and through, never more demonstrated that his next point.

“I would like to say something about the guy who finished second. He was a really good player and had to contend, not just with me, but also with the British Rail. So it couldn’t have been that easy for him to focus – which he did. He never complained during three hours of heads-up and when you play heads-up for that long, the difference between winning and losing is just a cigarette paper. The second the last card hit the deck my brother and everyone else just mobbed me. By the time I had managed to extricate myself from the pack there was Brian standing with his hand outstretched and I thought that was very classy.”

The word on the street is the rail that Boatman had, was one of the most boisterous and emotional rails that the WSOP had ever seen. Certainly, the best of this tournament. It wasn’t just the fact that the British Isles needed a British winner. Boatman is special. I hope he doesn’t mind me saying this, but he’s like the Daddy of the Hendon Mob. He carries this aura of respect in the poker industry, and I think that’s why so much emotion came pouring down from the rail on that amazing night.

”If they hadn’t of behaved I wouldn’t have had it. I would have told them to stop, but they were very well behaved. We have been used to British success and there was a lot of desire building up for something to cheer about so it was another chance to swing and shout. We marched down the corridor with everyone screaming and went over to the Palms where we drunk all night. I was very proud of them.”

After we finished the interview the Boatman brothers stepped onto the stage and Barny the Elder was struggling to keep it together. He must have been looking down on this huge throng of people all chanting his name with so much humility. His face was filled with over 20-years of poker memories all converging on this moment in his life. His brother Ross grabbed the mic.

“My brother, my best friend, my hero…the legendary Barny Boatman.”

The cheers hit the roof and my girlfriend looked at me and said, “Aww…you have a tear running down your cheek.”