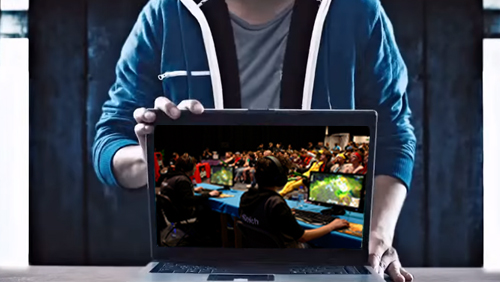 This is a guest contribution by Mark McGuinness, co-founder of esportsbet. If you would like to submit a contribution please contact Bill Beatty for submission details. Thank you.

It may appear to most that looking at the media at that moment that North America invented eSports. There is no doubt that the American’s are giving the ‘sport’ the Hollywood panache. However the reality is before the eSports moniker arrived, the origins of video gaming are entwined in Asia way back to the 80’s with the Taito Corporation and the iconic Space Invaders. To games console manufacturers and publishers such as Sony and the PlayStation, the mighty Nintendo and the Gameboy and, of course, the Wii; to Namco Bandai, Capcom, who makes the popular franchises for Resident Evil and Street Fighter.

Asia has dominated the video games market since 2007, with its value expected to rise to 39.74 billion U.S. dollars in 2016 according to market research firm Statista. If you needed more convincing in 2013, Statista estimated 282 million massively multiplayer online (MMO) gamers in the Asia Pacific region. This reportedly generated 9.5 billion U.S. dollars in MMO games revenue which were seven billion more than the North American market.

Why Asian sportsbooks should introduce eSports – the margin booster.

It is well-known that Asian sportsbooks are a volume based economy, whereby players bet more on Asian Handicaps, the predominating form of fixed-odds betting on football than any other bet type.

The problem with this is that to remain competitive the Asian operators’ margins are wafer-thin and most operate to a margin of less than 2%, some even lower to attract volume and ‘churn’ through their betting platforms.

This creates the need for Asian sportsbooks to introduce higher margin products, namely live casino or virtual sports products to move the gross margin nearer double-digits resulting in a more net profit for the business.

Betting on eSports is a product that may just emancipate Asian sportsbooks reliance on lower-margin products. Why may you ask? Firstly the market demand from millennials in Asia and their proclivity towards video gaming is inordinate and rivals the ageing audiences watching football in the region. Secondly in every eSports real-money competitive event whether that’s taking place in North America, Europe or Asia, the leading players topping the money leader boards are from Asia. Thirdly many Asian’s aspire to be the next players like Lee “Faker” Sang-hyeok and Kim “Deft” Hyuk-kyu or join illustrious teams such as SK Telecom T1 K, and Samsung Blue would be a dream come true. Fourth this eSports audience embraces technology, in the form of mobile first engagement and the usage of alternative forms of currency, namely Bitcoin for their digital entertainment requirements. Lastly and more importantly the margins afforded to Asian operators offering betting products on eSports are double-digit versus single-digit under the current betting offerings.

Several Asian operators are already active in the sector. 188bet was one of the first to offer eSports betting products. Dafabet signed a sponsorship deal with UK-based pro eSports organization Fnatic, arguably one of the world’s top eSports team and likely winners of this years’ League of Legends World Championship final due to take place Berlin, at the Mercedes-Benz Arena October 31st.

A new era for Asia operators

eSports is certainly creating a lot of innovation within the supply chain. For example Unikrn, a pure-play eSports betting site that partnered with Australia’s Tabcorp and which hasn’t even being trading for a year has amassed 7 million players. That is the power of a community-based gambling entertainment offering around eSports.

We could just be witnessing the release of the shackles for mainstream Asian sportsbooks entrenched in low-margin products. They could transform into new-era digital gambling entertainment companies that embrace the cultural proclivity and community that is central to eSports within the Asia-Pacific region and the betting experience – success awaits.

Mark McGuinness has more than 15 years’ experience in digital marketing director roles within the iGaming industry. He is the co-founder of esportsbet a resource for gamers and sports bettors who wish to start betting on eSports.