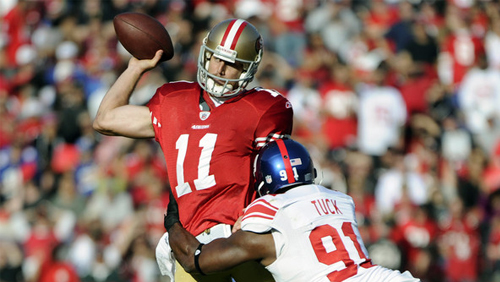 Bookmakers had their best week of the NFL season as a handful of public teams dove head long into the short end of the pool on Sunday. Among the fateful divers were the Falcons, Jaguars, Saints, Bills and Giants.

Three teams from that money sucking quintuplet — Atlanta, Buffalo and New York —managed to secure straight up wins, but they failed to cover spreads of seven, two and seven points, respectively.

Matt Ryan and the Dirty Birds were forced into overtime by a salty Redskins squad, and they won the game via a pick six in the extra period; however, the defensive score was not enough to cash for the 74-percent that wagered on a Falcons cover. Atlanta won the contest 25-19.

The tight line in the Bills/Titans game (two points) had people backing Buffalo, the seemingly superior team, at 75-percent against the spread. The Bills spotted Tennessee 10 points, though, and while they were able to mount a game sealing comeback, their 14-13 victory was also a win for the bookmakers.

New York entered its Sunday Night Football showdown with the downtrodden 49ers a -7 home favorite. The Giants found themselves in a battle with San Francisco from the opening kick. The Niners took a 3-0 and then fought their way to a 27-23 with under two minutes to play in regulation. But, like most bad teams do, they found a way to give the game away. New York scored a go-ahead touchdown with 21 seconds remaining in the game to lock up a 30-27 win.

San Francisco’s effort produced another large victory for the books as the public was all over the Giants. Seventy-three percent of the money was on a New York cover.

Philadelphia scored its first dominating win of the season on Sunday, throttling New Orleans 39-17 at Lincoln Financial Field. Given the Eagles inconsistencies this season, bettors were more inclined to back the Saints — in spite of their issues — at +5.5 against the spread (61-percent of the money was on a New Orleans cover). Whoops.

The Jaguars/Buccaneers birthed a similar scenario as the public leaned in favor of a bad road team getting three points from a host squad that had won just one game (62-percent were on the Jags). Mistake. Tampa Bay defeated Jacksonville 38-31 to bring home a straight up and against the spread win.

Denver and Arizona, however, kept the weekend from being a full blown bookmaker party. The Broncos had 77-percent of the against the spread money while the Cardinals were getting 83-percent of the betting share. Peyton Manning and company cleared the four point line with a 16-10 win over Oakland. Bruce Arians’ crew made it less exciting, cruising their way to a 42-17 win as a three point road favorite in Detroit.

Notes and Notes from Around the League

Jamaal Charles season ending ACL tear added injury to insult for the Kansas City Chiefs, who had playoff expectations but instead appear to be headed toward a top 10 pick in next year’s draft. Andy Reid’s play calling is conservative at best and it gets even more reserved when Charles exits games. Of course, Alex Smith only exacerbates the Chiefs offensive problems. Smith’s protection is certainly subpar, but he sees more ghosts than the Mystery Machine crew and his happy feet are hampering the offense. Unfortunately for Kansas City, this defense is not playing well enough to make up for Smith and the offense. According to Football Outsiders latest playoff odds report, the Chiefs has a 6.9-percent chance of qualifying for the postseason.

Paper bag hats about to return to Detroit
A playoff team a season ago, the Lions are the league’s only winless team this year. Detroit fell to 0-5 with its aforementioned loss to the Cardinals, an ugly performance which saw Matthew Stafford play his way to a benching. The seventh year pro was replaced by Dan Orlovsky in the third quarter after tossing three ugly interceptions. Stafford’s job is probably still secure for the time being, but head coach Jim Caldwell’s position will grow more tenuous with each loss.

And then there were Six
Green Bay, New England and Denver preserved their undefeated status with relative ease over the weekend, earning 24-10, 16-10 and 30-6 wins, respectively. Atlanta and Cincinnati hung on for dear life, though, as both clubs needed overtime to secure victory. The Falcons rallied from a four-point fourth quarter deficit and eventually defeated Washington 25-19 while the Bengals clawed their way out of a 17-point hole to defeat the defending NFC Champion Seahawks 27-24. Carolina, of course, had a bye this weekend.

Looking at the schedule, it would appear the Patriots and Falcons are best positioned to extend their perfect seasons. Cincinnati has back-to-back road games against the Bills and Steelers in the offing, the Packers and Broncos are set for a Mile High showdown on November 1 and the Panthers head to Seattle this weekend. The Pats have a Sunday Night Football meeting with the Colts in Indy coming up, but that looks like a less than daunting task than initially believed. The Falcons, meanwhile, do not face a team with a winning record until their November 22nd clash with the Colts.