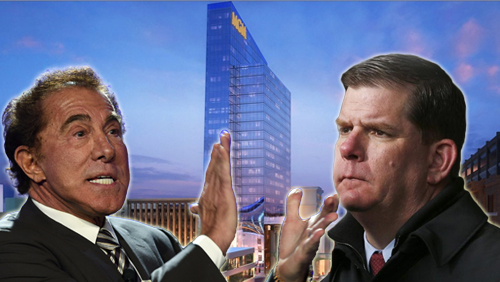 Get your popcorns ready: The second word war between Steve Wynn and Boston Mayor Martin J. Walsh has started.

On Tuesday, the casino mogul railed against the City of Boston’s latest suit that aims to block his proposed $1.7 billion casino in Everett.

In a statement to Boston Globe, Wynn said the suit “will serve no one, least of all the citizens of Boston.”

The city’s suit, filed last Monday, questions the validity of an environmental permit given to Wynn Resorts to allow the casino operator to begin the construction. The suit reiterated the city’s longstanding argument that the planned Everett casino will lead to increased traffic.

Walsh’s administration has already spent at least $1.5 million on another lawsuit that charges Wynn’s casino license from the Massachusetts Gaming Commission was “the product of a corrupt process,” according to the news outlet. But Superior Court Judge Janet Sanders questioned the city’s legal grounds for the suit, while saying that she’s not sure if a judge “should wade into” such matters.

The Boston mayor reportedly meet with two Wynn executives last week in what appeared to be a sign of truce between the two sides. And then the gloves came off after the city filed the new lawsuit several days later.

“It has become clear the mayor has decided that litigation is his way of being ‘productive,’” Wynn said in his statement, according to Boston Globe.

MGM Resorts Springfield casino has hit another snag, this time over the redesign of its 25-story hotel tower.

On Tuesday, MGM executives met with the city council to discuss the plans to reduce the size of its hotel tower as it moves to a new location. The casino operator will abandon the original glass façade design for the tower, but the new hotel design will still have 250 rooms crammed in six floors.

MGM told 22News they are way over their head if they pushes through with the original plan. According to the news outlet, the costs to build a skyscraper have already jumped 30 percent, and the casino operator wanted to stay within its $800 million construction budget.

City councilors, however, couldn’t agree on the redesign. Council President Michael Fenton was critical of the change, saying it removes the “wow factor,” while Councilor Timothy Rooke believes the change makes the casino “much better,” MassLive reported.

MGM Springfield President and CEO Michael Mathis made indications that they are flexible to changes, telling the council that they “are not asking for a take it or leave it” with the redesign plan.

Despite the proposed changes, MGM officials said construction work is ongoing. According to the casino operator, about 675 construction workers have logged in an estimated 104,000 hours of work to date.

MGM Resorts is already delaying the opening of its Springfield casino by a year due to the Interstate 91 viaduct’s rehabilitation. Under the new plan, the casino complex is now expected to be completed in August 2018 and will have its official opening a month later.