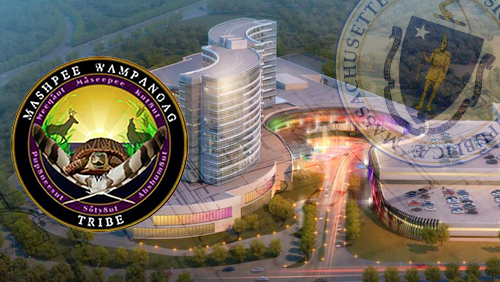 Mashpee Wampanoag to begin construction of a $500 million resort casino in Taunton, Massachusetts in 2016.

The Bureau of Indian Affairs on Friday approved the tribe’s application to hold over 300 acres in Taunton and Mashpee in trust.

Tribal Chairman Cedric Cromwell called it “truly a glorious, monumental day” for the Mashpee Wampanoag, which became a federally recognized tribe in 2007.

“Today, history has come full-circle,” said Cromwell in a statement. “While some outside the Tribe will focus only on our quest to build a destination resort casino in Taunton … for us this goes far beyond economic development. This is about controlling our own destiny and preserving our ancient culture.”

The tribe’s proposed casino complex that includes three hotels, an event center, restaurants, retail stores and a water park, has been backed by Malaysian casino resort investor Arkana Ltd., which has long been tied with giant Genting Group.

“We are going to work with Taunton and we are going to build a world-class, superstar, destination resort casino,” said Cromwell.

Lawyer Jonathan Witten sais that there could be a challenge because a Supreme Court decision, the so-called “Carcieri ruling,” says only tribes recognized before 1934 are eligible to be placed in trust. The Wompanoag’s were not recognized until 2007. It’s unclear if the decision by the Bureau of Indian Affairs will be challenged in court.

Rush Street Gaming has said the tribal casino outcome is still far from certain, with more steps in the federal process and, potentially, legal challenges, urging the state the Massachusetts Gaming Commission (MGC) to commit to awarding the final resort casino license — regardless of what happens with the tribe’s casino plans.

“We should not be held in limbo if the commission cannot give us some certainty that a qualified applicant, which we believe we are, will not be denied the Region C license because of the uncertainty of a potential tribal casino,” said Chairman of Rush Street Gaming Neil Bluhm.

However, under a 2013 compact between Massachusetts and the Mashpee, the tribe would annually pay 17% of its gaming revenue to the state, provided that its casino does not have any competition in the region.

Elaine Driscoll, spokeswoman for the gambling commission, said Friday’s announcement provides “further important information” as the commission weighs how to move forward in the southeastern region in the coming weeks.