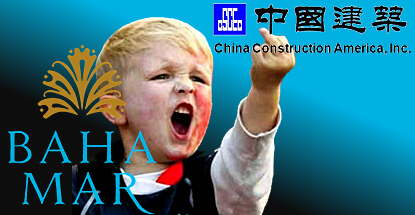 The US judge overseeing the bankruptcy of the troubled Baha Mar Casino & Hotel in the Bahamas has told the squabbling parties to keep talking.

On Wednesday, Baha Mar Ltd, the developer of the stalled $3.5b resort project, filed a restructuring plan with the US Bankruptcy Court in Delaware. The plan, which is intended to restart work on the nearly finished project, suggests voiding Baha Mar Ltd’s deal with its principal contractor China Construction America (CCA) as well as the $72m or so in claims CCA has against the developer.

Baha Mar Ltd filed for Chapter 11 bankruptcy protection in June, citing debts of over $1b. The project has been fraught with delays and cockups since the 2008 global financial crisis and CCA stopped work on the project earlier this year because it said Baha Mar Ltd wasn’t paying its bills. In retaliation, Baha Mar sued CCA for allegedly failing to meet specified timelines.

The restructuring proposal promises that all of CCA’s Bahamian subcontractors will eventually be paid “in the ordinary course of business.” This is intended to win back the support of the Bahamian government, which has filed papers to take control of the project due to the number of local jobs at stake. The government is also listed among Baha Mar Ltd’s creditors as being owed a total of $58.8m.

Baha Mar Ltd says its plan “does not impair the legal or equitable rights of Bahamian creditors or the government of the Bahamas, whose claims will simply ‘ride through’ the Chapter 11 cases.” The filing claims the project will eventually employ 5k Bahamians with an annual payroll of over $130m, “representing 12% of the GDP of the Bahamas.”

The Bahamian Supreme Court is expected to issue a ruling on Sept. 4 regarding the government’s petition to wrest control of the project from Baha Mar Ltd.

CCA, EXIM RESPOND
On Friday, US Bankruptcy Judge Kevin Carey heard counterarguments from CCA and Baha Mar Ltd’s primary lender, Export-Import Bank of China (EXIM). The two firms asked Carey to dismiss the case and let the Bahamian courts handle things, noting that a Bahamian court has already declared that the government is under no obligation to recognize a US court’s jurisdiction in this matter.

The Wall Street Journal reported that Carey appeared skeptical of Baha Mar Ltd’s restructuring plan, which keeps most of the developer’s debts in place – at least, debts not owed to CCA – while promising to secure the estimated $400m in additional financing the developer claims is needed to complete the resort.

Problem is, Baha Mar Ltd has had no luck convincing EXIM to provide more money than the $2.5b EXIM has already committed. This, and the deluge of bad publicity surrounding the project – which saw one of its hotel chains file a motion with the Delaware court this week seeking to be let out of its deal – led Carey to pronounce Baha Mar Ltd’s restructuring plan as “aspirational.”

Carey outlined two potential alternatives to a simple ‘yes’ or ‘no’ ruling; Carey could allow the Delaware bankruptcy to continue but give the Bahamian courts final approval of any settlement, or he could suspend the proceedings rather than dismiss them, which seems to fit with the advice Carey gave all the parties: “keep talking.”

Whatever ruling he eventually delivers, Carey promised to issue it as soon as possible, likely in September.