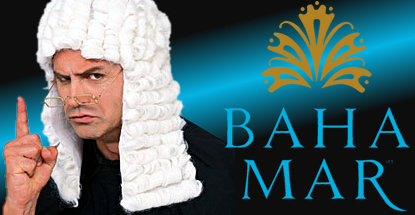 A court in the Bahamas has ruled that the country need not recognize the bankruptcy filing made in the United States by the developer of the troubled $3.5b Baha Mar resort casino.

Baha Mar Ltd. filed for Chapter 11 bankruptcy protection in Delaware last month after failing to resolve a dispute with its Chinese state-owned contractor China Construction America (CCA), which claims the developer hasn’t paid its bills for months. Baha Mar Ltd. also failed to convince its financial backer, the Export-Import Bank of China (EXIM), to commit the additional $600m it says it needs to finish the project.

Last week, Bahamas Prime Minister Perry Christie announced that his government would file a ‘winding-up’ petition with the country’s Supreme Court, effectively seeking to wrest control of the project from Baha Mar Ltd. Christie justified the move by saying the resort’s completion was “a matter of the utmost national importance” and thus it was improper for any decision on the project’s fate to be made by a court based outside the Bahamas.

On Wednesday, Justice Ian Winder sided with the government, saying the Chapter 11 bankruptcy protection Baha Mar Ltd. sought in Delaware would not be extended to the Bahamas. Christie praised the decision, restating his belief that Bahamian courts were “best suited to oversee the restructuring, completion and opening of the resort” should the developer fail to “reach an out of court agreement” with CCA and EXIM.

The developer, which had protested the government’s action as an attempt to “seize private party assets,” expressed disappointment in Winder’s ruling but said it was “even more disappointed in the way the government has responded to our Chapter 11 filing.” Baha Mar Ltd. went on to say it hoped the government would “stand by its word to be an impartial mediator in our effort to protect our investment and bring the project to completion.”

PricewaterhouseCoopers’ Gowon Bowe told Tribune242.com that the government’s move was “reactionary” but nonetheless a “wide and prudent” step given that Baha Mar Ltd. “can no longer pay all of its bills.”