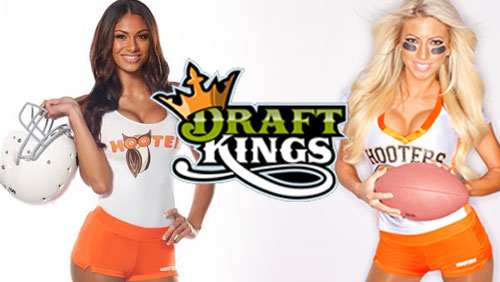 News for those who give a hoot!

On September 10, football is back! And Hooters, targeting further fan coverage ahead of the start of the 2015/16 NFL season, announced an exclusive partnership with DraftKings to hook up its guests with a shot at more than $300,000 in cash.

The partnership will see an extension of DraftKings’ ongoing media deal with US sports channel ESPN. The Hooters Fantasy Football Challenge will give fantasy enthusiasts the opportunity to compete against former NFL coach Jon Gruden for the first six weeks of the season, awarding $50,000 each week.

The deal will make Hooters the go-to destination of football fans to watch NFL games with the best wings in America and the world-famous Hooters Girls.

“As the football fan experience continues to evolve, Hooters is committed to deliver the best fantasy sports experiences anywhere — whether that’s providing the perfect backdrop for a draft party at your favorite Hooters, throwing the world’s largest fantasy football draft party or lining up free access to score real cash on DraftKings,” said Hooters Chief Marketing Officer Carl Sweat. “Our guests are some of the most passionate and knowledgeable football fans in America. So this year, Hooters is teaming up with DraftKings to be the first to bring our guests the excitement of daily fantasy sports, big cash prizes and an exclusive experience with Coach Gruden.”

“I’ve been hitting up Hooters since 1983, and I can assure you nothin’ says football season is here quite like watching the game on wall-to-wall flat screen TVs with the smell of Hooters world-famous chicken wings in the air and an ice-cold beer in your hand, served up with one-and-only Hooters hospitality, of course,” said Gruden. “This season, I can’t wait to see who brings their ‘A’ game for the $300,000 Hooters Fantasy Football Challenge.”

DraftKings have supported the special promotion by launching an exclusive ESPN TV campaign promoting the partnership.

In two weeks, the Steelers will face off against the Patriots in the first NFL game of the season. Every sportsbook has taken the odds for the season opener off the board in wake of Deflategate.

Last week, another unsuccessful hearing was held between the NFL and Tom Brady’s lawyers. If no decision or settlement is made by September 10, Brady’s lawyers and the NFLPA will likely ask for an injunction that prevents Brady’s four-game suspension from going into effect until after an official ruling is made on the case.  The next hearing is set for August 31.

Amid the controversy, the New England Patriots are still the second favorite to win the 2016 Super Bowl at 9/1, followed by the Green Bay Packers at 5/1 while the Philadelphia Eagles are at 14/1 and the Baltimore Ravens at 20/1.