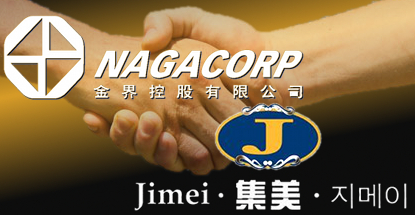 A leading Macau junket operator has struck a deal to ferry VIPs to Cambodia’s NagaWorld casino.

On Tuesday, Jimei International Entertainment Group announced that one of its subsidiaries would be promoting “not less than seven” gaming tables at NagaCorp’s flagship casino in Cambodia’s capital Phnom Penh. The deal is for one year with an automatic one-year renewal unless either party objects. Jimei said the deal’s contractual financial outlay obligations were “not significant.”

Details on the deal’s financials were also not significant. Jimei will handle the accommodation, transportation, food and beverage needs of the international high-rollers it brings to NagaWorld. Other than that, Jimei says only that “typical arrangements” have been made twixt junket and casino.

Jimei’s board touted the deal as offering “a more diversified portfolio of good income potential.” Jimei is considered one of Macau’s top-five junkets but that market is taking a beating, particularly on the VIP side. Meanwhile, NagaWorld is the only casino within 200km of Phnom Penh and its monopoly has another 20 years to run.

Jimei will join Macau über junket SunCity Group, which started making nice with NagaWorld last November during the casino’s well-timed charm offensive. NagaCorp rolled out a new junket incentive program just as China hit the brakes on both human and financial traffic to Macau. Junkets were looking for escape pods, somewhere decent to take their VIPs, somewhere not controlled by Beijing.

NagaCorp’s high-roller emphasis is on full display at Naga 2, a swank VIP-focused casino and retail complex being built right next door to NagaWorld and scheduled to open in 2017. The strategy has made NagaCorp’s revenues soar but profits have increased at a much slower pace due to the junkets claiming their share.

Nomura analysts issued a note last Friday relating discussions they’d had with NagaCorp execs, who said “more than 60%” of NagaWorld’s customers were actually Cambodians with foreign passports who fled the Khmer Rouge regime in the 70s and 80s but have since returned. (Local residents with plain old Cambodian passports cannot enter NagaWorld.)

The casino’s truly international clientele came mostly from Malaysia, Singapore and Vietnam. Nomura said NagaCorp execs were “not concerned” about China’s never ending crackdown on corruption, believing that the majority of NagaWorld’s high-rollers aren’t on par with Macau’s big spenders and thus their activity would fly under Beijing’s radar.