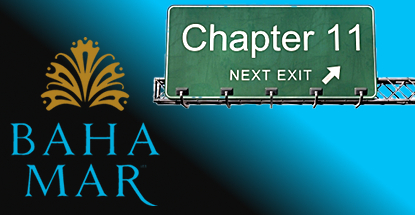 The parent company of the troubled Baha Mar Casino & Hotel in the Bahamas has filed for Chapter 11 bankruptcy protection.

Baha Mar Ltd. filed for protection in Delaware on Monday, citing debts of more than $1b. Among the largest unsecured creditors is China Construction America Bahamas Ltd. (CCA), a Chinese state-owned contractor which is listed as being owed $72.5m. CCA and Baha Mar Ltd. have engaged in a nasty public squabble over who bears more blame for the project’s delays.

Sarkis Izmirlian, Baha Mar Ltd’s chairman and CEO, said the voluntary bankruptcy was necessary due to “financial consequences of the repeated delays by the general contractor and the resulting loss of revenue.” The $3.5b resort was supposed to open last December and has missed a couple revised opening dates since then, with September cited as the most recent opening target.

Baha Mar Ltd. claims the bankruptcy will give them the time to “put in place a viable capital structure and working relationships to complete construction and successfully open” the resort “as soon as practicable.”

Izmirlian has agreed to arrange a Debtor-in-Possession financing facility of up to $80m, which will be used to meet the company’s payroll obligations while the Chapter 11 process is ongoing. Izmirlian warned that while he was willing to do “all I realistically can” to reach a deal with its major lender, he warned that if such a deal wasn’t reached in the “next few weeks,” Baha Mar would “have to make some extremely difficult decisions that would include workforce reductions.”

Izmirlian believes a “negotiated solution is possible among the existing parties” but couldn’t resist taking more shots at CCA, saying Bahamians “should no longer have to endure the adverse effects of the general contractor not fulfilling assurances.”

Recent speculation had Malaysian casino operator Genting looking to take a majority stake in the floundering project, although Baha Mar Ltd. has said there was no truth to these reports.