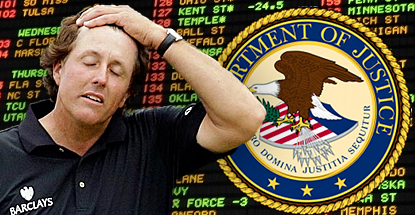 Pro golfer Phil Mickelson had been tied to an illegal sports betting case brought by US federal authorities.

On Monday, ESPN reported on a plea deal that federal prosecutors in California had reached with Gregory Silveira. A former low-level sports betting tout, the 56-year-old Silveira agreed to plead guilty to three charges of money laundering in connection with an illegal sports betting operation. Silveira faces a maximum of 60 years in prison and a fine of up to $1.5m when he’s sentenced on Oct. 5.

Silveira was accused of transferring money that he knew represented the “proceeds” of an illegal online gambling business based outside of the country. Silveira copped to the fact that the primary purpose behind the transfers between bank accounts under his control was intended to conceal the flow of resources to and from the illegal operation.

At the crux of the prosecution is a $2.75m wire transfer that Silveira accepted in March 2010 from an unidentified “gambling client” that two sources told ESPN was Mickelson.

An original copy of the plea deal contained a reference to the “money laundering of funds from P.M.” However, following ESPN’s queries as to Mickelson’s potential involvement in the case, the document was withdrawn and an amended copy was filed minus the reference to “P.M.”

The plea agreement’s use of the word “proceeds” is somewhat misleading, as it actually refers to any funds connected with the illegal gambling operation’s dealings. Mickelson has yet to be charged with any crime and his attorneys weren’t answering questions regarding the golfer’s possible involvement in the betting case.

Mickelson is a known betting fan who once got into trouble with the Professional Golf Association for making a $500 wager with fellow pro Mike Weir on a shot taken by Jim Furyk. Last year, Mickelson’s name surfaced in an insider trader investigation connected with renowned sports betting whale Billy Walters, who has also been linked to international online betting sites. At the time, Mickelson claimed that he’d never met Walters although other sources claimed the two were occasional golf partners.