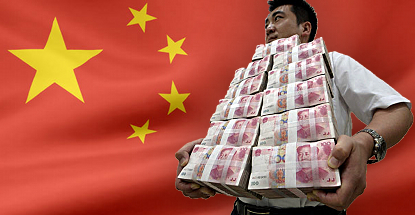 Corrupt officials embezzled or misused over RMB 16.9b (US $2.8b) from China’s state-run lottery operations in less than three years, according to a report by the country’s top auditor.

In November 2014, the National Audit Office (NAO) announced it had sent inspection teams to 18 Chinese provinces to determine how lottery administration centers were using the funds raised by the welfare and sports lotteries. On Thursday, the NAO reported that 18% of the government’s share of lottery revenue generated between Jan. 2012 and October 2014 had been improperly allocated.

The NAO said more than one-quarter of the RMB 65.8b in lottery funds it reviewed was “problematic.” State news agency Xinhua reported that this included embezzlement, fraud, illegal subsidies for staff, procurement of ‘fancy’ offices and unauthorized online lottery sales. China ‘temporarily’ suspended online lottery sales on March 1, which took a serious toll on approved online operators such as Shenzhen-based 500.com.

Seventeen of the provinces audited were found to have engaged in online lottery sales without the Ministry of Finance’s approval. The MOF has never explicitly licensed any online operators, although 500.com and China SMG network were approved to take part in an online sales pilot program.

The audit also found that 32 lottery shops had improperly allocated RMB 3.1b to build office buildings and hotels. On the plus side, the NAO reported that it had recovered RMB 14.5b of the misused funds as of May 31.

THINK-TANK SLAMS LACK OF GOVERNMENT OVERSIGHT
The government’s roughly 35% stake of lottery sales revenue is supposed to go toward social welfare projects. This week saw leading government think-tank the Chinese Academy of Social Sciences (CASS) release a report highly critical of the way the government’s share of lottery funds is being spent.

CASS researcher Yang Tuan said the lottery had raised RMB 104b for the government last year but Yang could only identify RMB 40b that had been spent on such projects. The report didn’t say the missing RMB 64b was stolen, only that “the government’s use of these funds is completely unconstrained and a share of the funds is not being used for public welfare.”