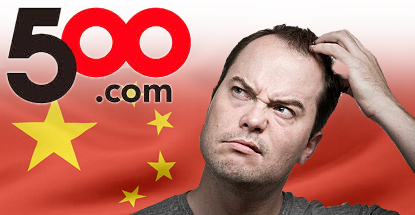 Chinese online lottery operator 500.com stock soared nearly one-third on Tuesday despite a disappointing Q1 earnings report and the resignation of its CEO.

However, 500.com reported a net loss of RMB 52m for the quarter, partly due to a RMB 30.3m bad debt provision and increased share-based compensation expenses. Cost of services expenses were up 46% year-on-year while sales and marketing expenses rose 118%.

Compared to Q4 2014’s numbers, total sales were down 25.7% and revenue was off 32.4%, reflecting the ‘temporary’ suspension of online sales that Beijing imposed on all its provincial lottery administration centers in late February. 500.com noted that it is “currently not generating any revenue” due to the suspension and expects “zero” sales in Q2, assuming the suspension isn’t lifted.

Despite the carnage, 500.com shares are currently up nearly 30% to $21.76, rebounding from a 9% decline on Monday. But bearish investors are reportedly snapping up short positions on the stock, expecting its bump to be short-lived. In the past 12 months, the stock is down 37% but up 21% since the year began.

Along with the earnings report, 500.com founder Man San Law announced he was stepping down from the CEO role, while retaining his role as company chairman and taking on a new role as chairman of the compensation committee. 500.com president Zhengming Pan has been elevated to the CEO position and also got a seat on the board to fill the spot vacated by Qi Li, who resigned for “personal reasons.”