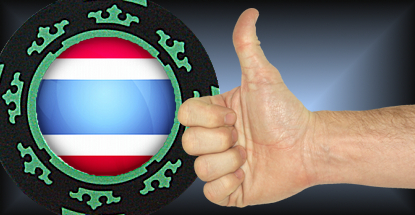 Some influential political figures believe Thailand needs to legalize casinos, if only to keep Thai gamblers at home where they belong.

On Monday, Major Arnun Watcharothai told The Nation that there were currently 22 casinos clustered just beyond Thailand’s borders and 80% of the gamblers inside these casinos are Thais. Arnun wants to permit casinos in specific areas like Pattaya so that Thai citizens – and casino taxes – don’t fly the coop.

Arnun is one of a dozen members of the National Reform Council (NRC) that have banded together under the banner of ‘NRC members who love Thailand.’ (Aim higher, guys.) The 250-member NRC, which was formed following last year’s military coup, has been tasked with implementing reforms across the Thai landscape, including the economy, society, law and justice.

The increased surveillance during the coup revealed that there are plenty of small illegal casinos already operating within Thailand, along with a thriving illegal sports betting market. But efforts to convince the pre-coup government to legalize the practice met with opposition from Buddhist groups and the matter was always dropped.

Arnun said a resort casino in an area like Pattaya would benefit from neighboring Bangkok’s tourist volume. International guests would be the primary concern of these casinos but locals would be allowed entry provided they could demonstrate a certain level of fiscal propriety.

Arnun wants a committee to study the formal plan his group plans to submit for a vote by the entire NRC. Should the NRC okay the plan, the military’s National Council for Peace and Order would still have to give its okay.

Those border casinos in towns like Poipet will be rooting for Arnun’s group to fail. Last year’s coup tightened the borders and the casinos found themselves empty. But the border eventually loosened and the casinos filled up with even more Thai gamblers because their new military government had eliminated most of their domestic options. The circle of life…