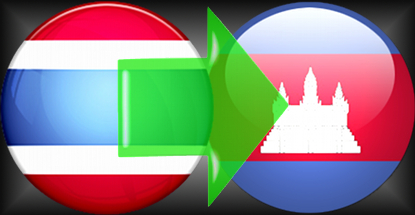 The nine small-scale casinos in the Cambodian town of Poipet are doing boffo business thanks to last month’s coup just across the border in Thailand. Agence France-Press reported that Poipet’s casinos had seen a sharp influx of business in recent weeks as Thai gamblers sought a place to wager in peace. Gambling on anything other than the lottery or domestic horseracing is illegal in Thailand and the military junta now running the country has made it clear that casino-style gambling and World Cup betting remain off limits.

Some major illegal gambling dens have been shut down in recent weeks, including some discovered by accident as the Thai army hunts down activists protesting the junta’s overthrow of the democratically elected government. One baccarat player in a Poipet casino told AFP that Poipet was awash with Thais because they “cannot play these games in Thailand now … the military has shut down illegal gambling.”

On Thursday, Thai authorities shut down a major illegal casino in Bangkok before it even had a chance to open to the public. Police swept down on the ‘Number One’ casino, arresting 37 individuals, including 23 Cambodians and two from Myanmar. Police also confiscated 27 baccarat tables, a thousand packs of playing cards and gambling chips worth THB 2.9m (US $89k). A district police chief has been reassigned to other duties, apparently on suspicions that he’d been in cahoots with the casino operators.

The flood of Thai gamblers into Poipet marks a dramatic turnaround from just a couple weeks earlier, when these same casinos were complaining that the coup was seriously cutting into their business. On June 3, the Phnom Penh Post quoted Kim Ledaro, managing director of Crown Resorts (not to be confused with James Packer’s Crown Resorts), saying the daily average of Thai gamblers in Crown’s three Poipet casinos had fallen 40% since May 22. With nearly 99% of Crown’s usual patrons coming from Thailand, their absence was palpable.

Figures from the Poipet International Checkpoint had supported Ledaro’s estimates, suggesting daily border crossings from Thailand had fallen by more than half since the coup. Ledaro suggested his absent Thai customers must be “concerned for their security, which causes them to want to stay at home.”

Apparently, these once skittish Thais have since gotten over the shock. Then again, perhaps Poipet’s croupiers are simply confused over who they’re serving. More than 220k Cambodian migrant workers have reportedly flooded into Poipet over the past two weeks, after (apparently unfounded) rumors spread that the Thai junta was intent on purging the country of foreign workers. As these temporarily displaced workers wait for the ‘all clear’ signal to return to their jobs in Thailand, Poipet’s casinos are happy to provide options with which to pass the time.