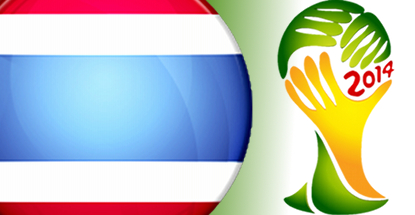 Like revved up racehorses waiting for the starting gates to swing open, police forces across Asia are gearing up to handle the expected surge in sports betting that comes with every FIFA World Cup. On Thursday, Thailand Police General Ake Angsananont warned football bookies that the police would be observing the National Council for Peace and Order’s directive to “eradicate” illegal gambling dens from the Bangkok area. The country may have just undergone another military coup, but bookies have been warned not to assume the authorities are too distracted to crack the whip.

But the potential rewards of handling wagers from Thai football bettors may be too alluring. On Thursday, the University of the Thai Chamber of Commerce (UTTC) released a survey that showed Thai bettors expect to wager Bt 43b (US $1.3b) on World Cup matches in 2014, a 17% rise over the sums wagered on the 2010 event. Total World Cup spending, including food, beverages, TV and satellite sales and the like, is expected to top Bt 70b.

The survey involved some 1,200 individuals, with over half of them between 20 and 25 years old. Slightly more than half (50.6%) said they expected to make money wagering on the matches, compared to 43% who voiced similar opinions during the Euro 2012 football tournament. Past performance indicates that only about one in three will actually turn a profit via their betting. The average amount expected to be wagered on this World Cup worked out to around Bt 8k ($245) per gambler.

Thanavath Phonvichai, director of the UTTC’s Economic and Business Forecasting Center, noted that over 60% of the World Cup’s economic impact on Thailand would be devoted to betting. Thanavath said it seemed that “people of late have shown less of an interest in football matches themselves and more interest in the potential benefits of gambling.” GOOOOOOOOOOAAAALLLLL!