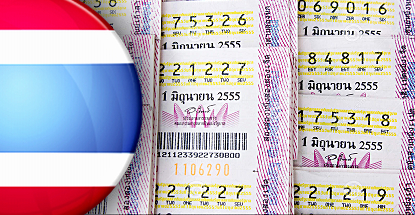 Thailand‘s Royal Thai Police Office says it arrested over 5k punters who dared place wagers on the 2014 FIFA World Cup, including 251 unlucky souls who were caught on the final day of the month-long sporting event. Of the total 5,016 arrests, 258 were bookmakers, 127 were runners shuffling between bookies and punters, while a whopping 4,678 were mere bettors. Police also claim to have closed off access to 2,223 football betting websites. Seriously, if there were a Golden Handcuffs award for most active Asian anti-betting police force, Thailand’s military junta would get a lot of votes.

The junta has been less successful in its bid to stamp out the practice of reselling lottery tickets at inflated prices. Along with horseracing, the lottery is the only form of gambling officially tolerated in Thailand. The Thai national lottery involves the use of pre-printed tickets, each with a unique serial number. The Asian belief in the lucky qualities of certain number combinations makes certain tickets more desirable than others, which has led to a thriving black market in which ‘lucky’ tickets can command several times their original face value.

Having already enacted a highly successful crackdown on underground casinos, last month saw the junta order all lottery tickets be sold at their 80 baht (US $2.50) list price. While the move was applauded in Bangkok Post op-eds, it proved far less popular among small lottery retailers, the last link in a chain that begins with the Government Lottery Office (GLO) but then travels through wholesalers, provincial administrations and charitable foundations.

By the time the dealers get their tickets, they wind up paying more than the listed price. The dealers also have to face the downside of numerology, in which tickets bearing certain ‘unlucky’ combinations are usually only sellable at a steep discount. Unable to turn a profit, dealers began cancelling their orders from wholesalers. The GLO earns annual revenue of around 2b baht ($62m) from these dealers’ sales, leading former GLO director-general Chaiwat Phasokpakdi to tell the Wall Street Journal, “I don’t think the army understands what they are doing.”

Perhaps not, but they learn quickly. Earlier this month, Gen. Paryuth Chan-ocha, head of the National Council for Peace and Order, went on television to announce the suspension of the price-cap plan, presumably so he could more properly study the principle of cause and effect. The cockup has renewed calls for changes to the lottery system, including doing away with middlemen entirely by distributing western-style electronic lottery terminals. That would also allow buyers to select their own lucky numbers, although given the widespread preference for the same number combinations, winners might be disappointed at having to split their jackpot with every other ticket buyer in Thailand.