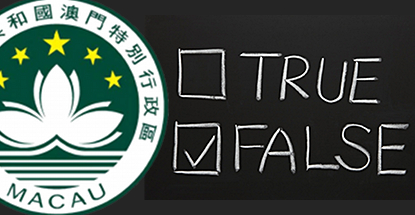 Earlier this week, the Neptune Group was said to be considering sacking up to 300 staff members due to decreased activity at its Macau VIP gaming rooms. Similar reports dogged the David Group junket, which was said to be closing two of its remaining four VIP rooms in Macau and laying off 100 staff in the process.

On Thursday, an outfit calling itself the Neptune Guangdong Group took out an ad in the Macao Daily News, clarifying that it had around 800 staffers in Macau, and due to this “large number of employees and the high turnover rate,” the company routinely sees between “100 and 200 employees who resign or are let go each year for different reasons.” The ad said this year’s employee turnover rate was “similar to the level of the past few years … the relevant media reports are unfounded.”

Similarly outraged, the David Group contacted Macau Business Daily to clarify that it had “no such plans” to close any more VIP rooms in Macau. David Group spokesman Frank Ng said the company wanted to nip these rumors in the bud before they spread “continuously and endlessly.”

There’s no question that junkets have been among the hardest hit by Macau’s year-long revenue slump, which has primarily affected the VIP gaming sector. Despite the junket operators’ denials, Japanese analysts Nomura issued a note this week saying that recent conversations with Macau casino operators had left it with the impression that “there could be more VIP room closures to come.”

Nomura’s Richard Huang and Stella Xing said the mainland Chinese government’s willingness to prolong its anti-graft policy had left casino operators with “a general lack of confidence” that Macau’s fortunes will reverse themselves anytime soon. Nomura also warned that Macau’s government appeared “generally unconcerned by the slowdown due to its massive fiscal reserve and the still-healthy labor market.”