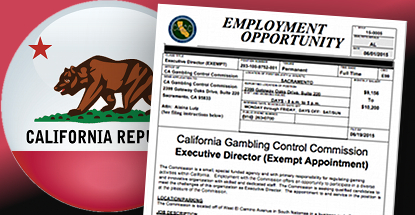 The California Gambling Control Commission has a new chairman, albeit one with little in the way of actual gambling industry experience.

On Friday, California Gov. Jerry Brown announced that Jim Evans would replace former Commission chairman Richard Lopes, who resigned his post last month. Until Thursday, Evans served as Brown’s spokesman. Prior to that gig, Evans held a similar mouthpiece role for the state’s Business, Transportation and Housing Agency. Evans has a journalism background, having served as a reporter for newspapers including the Sacramento Bee.

Quite how any of that qualifies Evans to preside over the state’s fractious gambling industry is one of the mysteries of politics. Evans assumes control of the $139k per year job during a time of great flux in the California gaming ecosystem, which is engaged in a highly divisive fight over how to define the parameters of a regulated online poker market.

Lopes announced his resignation last month despite Brown having reappointed Lopes to the post through 2018 in January. Lopes was the second commission member to have walked away from the job in May, following executive director Tine Littleton’s similarly abrupt exit two weeks earlier.

Both commission members were dealing with conflict of interest allegations regarding an investigation into alleged profit skimming at San Diego cardroom Casino M8trix. The investigation had grown to encompass allegations of improper contact between Casino M8trix staff and commission members, which prompted both Lopes and Littleton to recuse themselves from matters regarding the investigation, until it became apparent that this was insufficient to eliminate the taint of impropriety.

The Commission website is still advertising for a replacement for Littleton. Interested applicants for the $120k per year position need some kind of college degree, although year-for-year management experience in business administration, public information and law enforcement is deemed an acceptable substitute. You also need to demonstrate “creativity, sound judgment, accountability and team building,” in part because none of the industry’s stakeholders appear to possess any of these qualities.