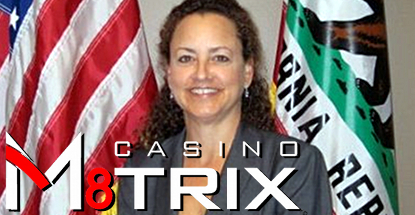 The investigation into alleged profit skimming at San Jose cardroom Casino M8trix appears to have prompted the resignation of an executive director at the California Gambling Control Commission.

On Thursday, Commission executive director Tina Littleton (pictured) announced she would be stepping down at the end of this month. Littleton, who has held the director role for the past four years, released a statement on Friday saying she was “ready to pursue other opportunities.” However, Litleton plans to stay on with the Commission as a staff services manager.

Littleton is in a common-law relationship with James Parker, a former state Department of Justice special agent. Parker has been accused of sharing information on the profit skimming investigation with Robert Lytle, the former head of the state’s Bureau of Gambling Control (BGC). Parker was also a former employee of Lytle’s gaming consulting firm.

Lytle has been accused of ordering BGC employees to curtail their investigations into alleged shenanigans at Casino M8trix when it was still known as Garden City Casino. Lytle became Garden City’s compliance officer mere days after resigning from the BGC in 2007.

Lytle has also been accused of improperly contacting and misleading state regulators following his move to the private sector. Lytle stopped working for M8trix last year but the BGC is trying to strip him of the two temporary ownership licenses he holds for two Sacramento-area cardrooms.

In February, Littleton disclosed her relationship with Parker and recused herself from further matters regarding the investigation into Lytle’s activities. Commission chairman Richard Lopes, who used to be Lytle’s boss at the DOJ, also recused himself. The next hearing into Lytle’s suitability is scheduled for Oct. 16.

In February, Lytle’s attorney Jeff Kravitz claimed the state’s tribal gaming interests were “the reason this came up.” Kravitz told the Silicon Valley Business Journal that the tribes felt threatened by cardrooms extending their offering into blackjack and other house-banked games and were looking to “send a message to their opposition” by targeting someone “as well known” as Lytle.

Regardless of the source of their current troubles, California’s gaming regulators will need to present a more competent and trustworthy face to the public if they’re to be granted the authority of overseeing a regulated intrastate online poker market.