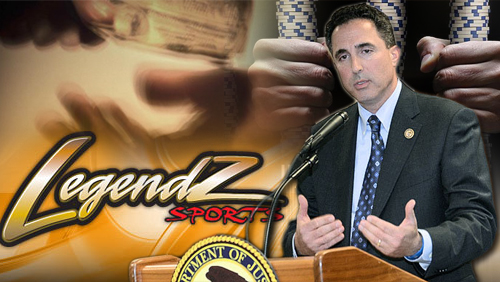 U.S. Attorney Richard Hartunian announced that the nearly $10m seized from the defunct online sportsbook Legendz Sports was distributed to six law enforcement agencies that worked on the case.

“Stripping criminals of illegal profits deprives them of the fuel that sustains their illegitimate enterprises,” said Hartunian. “In illegal gambling, money is both the way the crime is committed and the reason for committing it. No money equals no crime.”

“Forfeiting the proceeds and instrumentalities of crime puts the money to work for good – helping the victims of crime, funding community programs and providing resources to be used to promote public safety,” Hartunian added. “Such sharing can enable a local police chief, sheriff, or district attorney to commit the necessary resources to conduct a complex, long term investigation that in the end enhances public safety.”

Evidence showed that Bramley and Diebner worked as bookies in Texas, illegally soliciting and accepting sports wagers as well as settling gambling debts while Moran worked as a runner who delivered and picked up cash for Legendz Sports.

Bookies and runners transported millions of dollars of gambling proceeds in cash and checks from the United States to Panama. The checks were made out to various alleged shell companies created by Legendz Sports throughout Central America.

A sentencing hearing has not yet been set.

Other figures indicted in the same case have already learned their fates. Earlier this month, Legendz Sports former CEO Bartice “Luke” King and others were also indicted by the US Department of Justice with taking online and telephone wagers from US residents via operations based in Panama and Costa Rica.

Michelle Lasso was fined $25k and ordered deported to Panama after pleading guilty to money laundering in March 2014 while Philip Gurian was released in April 2014 after spending a year in federal custody, given three years of supervised probation and a $100k fine, and New York resident Craig Hayner received a $250k fine and a conditional discharge.