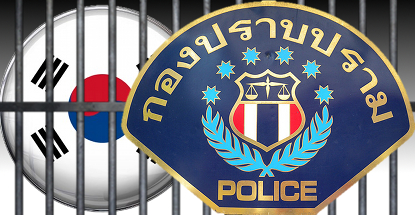 Another batch of expatriate South Koreans has been caught running an online sports betting site targeting their countrymen back home.

Over the weekend, police in Thailand arrested seven South Korean men accused of running an illegal online sports betting operation out of two adjoining condominiums in a Bangkok luxury tower. One condo housed the computer gear, while the men slept in the other.

Police said the ring had been operating for around three years, frequently shifting their location in a bid to avoid detection. Police reportedly received a tip-off from someone in the building who noticed that the condo in question was full of foreigners who didn’t seem to go out all that much.

Thai media reports said the ring generated between Bt30m and Bt90m (US $900k to $2.7m) per month from bettors in South Korea, although it’s unclear whether this sum was betting handle or profits. The seven arrested individuals have been charged with unlawful online gambling, illegal entry into the country and working without proper permits.

Fallout from the raid has led to six senior officers at the Huai Khwang police station being transferred to inactive posts. Among those reassigned were a Police Major General, his deputy and the station superintendent. It’s unclear what evidence led to these officers being placed on leave. Earlier this year, another South Korean-led online gambling operation in Bangkok was shut down amid allegations that as many as a dozen police officers had been taking bribes from the ring to look the other way.

South Koreans appear particularly entrepreneurial when it comes to setting up online gambling sites in other countries. Recent years have seen multiple rings busted in the Philippines and this year has already seen South Korean betting rings shut down in Vietnam and Macau.

ONE Championship kicks off ONE: Kingdom of Heroes with blockbuster press conference in Bangkok
Press Releases
11 July 2018

Full card announced for ONE: Warriors of the World in Bangkok on 9 December
Press Releases
28 November 2017