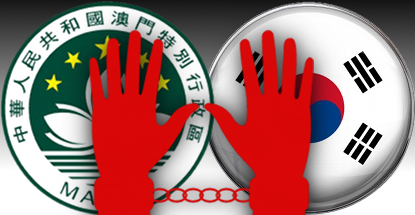 Police said the three individuals had begun renting the flat in November, kitting it out with what was described as an “unusual” number of computers and other IT gear. The men set up a website targeting South Korean bettors, who can’t legally wager in their home country. Customers were told to deposit funds in a designated bank account in South Korea, after which they were free to place their football and basketball wagers with the site.

Police believe the operation attracted over 100 clients and handled around HKD 7m (US $900k) in wagers in the short time it was up and running. In dollar terms, it pales in significance to the bust Macau police made last June, which handled HKD 5b ($645m) in wagers in just the first week of the 2014 FIFA World Cup. US federal prosecutors have alleged that the ring was organized by high-stakes poker player Paul Phua.

But this week’s bust is notable in that it represents the first time in a decade that Macau has caught South Korean nationals at the controls of an illegal gambling operation. Last month saw Vietnam deport six South Koreans for operating an illegal betting site out of a rented villa.

Police are keeping their counterparts in South Korea apprised of the situation on the presumption that other individuals were part of the operation in that country. The three men arrested Tuesday have been charged with operating illegal gaming activities and participating in organized crime. Sports betting in Macau is the sole responsibility of the Macau Slot enterprise.