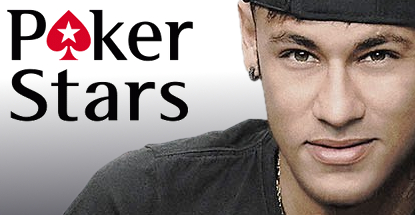 In addition to being a demon on the pitch, Neymar is a known poker fan, routinely entertaining his 14.5m Instagram followers with pictures of he, his buddies and his dog ‘Poker’ enjoying the other beautiful game. Neymar also has over 18m Twitter followers and 51.2m Facebook fans, offering PokerStars a suitably enormous megaphone with which to promote their brand.

In making the announcement, Neymar stressed his love of poker and claimed that achieving success on the felt required many of the same skills – mental strength, resilience, patience, composure and focus – that made him successful in his day-job. (Okay, but good luck trying to head away a threatening river card.)

Neymar will be easily identifiable online under the user ID ‘neymar-jr’ and he’ll also be highly visible via his participation in a series of “Celebrity Duels’ at the European Poker Tour’s 12th season kickoff event in Barcelona this August.

Amaya CEO David Baazov praised Neymar as a “young and extremely charismatic megastar who loves interacting with fans.” Baazov believes the partnership is “a great opportunity to market the game of poker across the globe and attract new fans.”