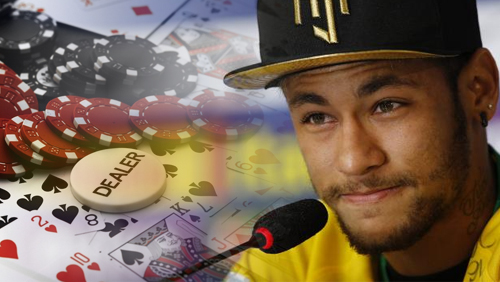 Barcelona star Neymar is preparing for his team’s Champions League tie with Man City by playing poker, and Pamela Anderson has slapped a restraining order on the Big One for One Drop star Rick Salomon.

They will be looking to hold on to their 2 v 1 lead when they face the Premier League champions, Man City, in the second leg of the Champions League knockout phase on Wednesday night. Then on Sunday they entertain their fiercest rivals Real Madrid in El Clasico.

It’s a time for their players to chill.

And when their Brazilian star Neymar decides to chill, he does so by playing poker with his buddies.

We first learned about Neymar’s love for the game when he dug his poker chip set out of the loft to pass the time whilst recuperating from the back injury that so cruelly ended his World Cup hopes. The media even ran a story suggesting that when Germany scored their seventh goal in the thrashing of all thrashings, he turned the box off and played poker instead.

On Saturday night, Neymar was once again playing poker. He posted a picture of his home game on Instagram, hours after a Lionel Messi brace, in a 2 v 0 win over Eibar, gave them a four-point lead at the top of La Liga.

That Barca home game must get pretty tasty.

Gerard Pique has experienced the might of the European Poker Tour (EPT) and World Series of Poker (WSOP), and Luis Suarez is a former ambassador of 888Poker. A position that was terminated when they realized he was a vampire.

At least Neymar plays the game in his own time. Udinese once sacked Albert Riera for missing a Serie A game because he was in Slovenia competing in a poker tournament. He finished second for £3,000.

One Drop star, Rick Salomon, has been hit with a restraining order, after his wife, former Baywatch star Pamela Anderson, told the court that she fears for her safety and was ‘scared of what he is capable of doing to me.’

In court documents obtained by the showbiz mag PEOPLE, the 47-year old actress alleges that Salomon once smothered her with a pillow during sex, accused her of eating fish {I assume she is vegan}, and called her a “crack whore,” “slut” and “serial baby killer” before threatening to send naked photographs, that were taken without her consent, to every man and their dog.

The couple first wed back in 2007. It lasted two months. They tried again in 2014. This time they lasted seven months before Anderson threatened divorce for a second time. She didn’t go through with it. Her latest divorce attempt came earlier this year, hence the subsequent abuse and counter abuse arguments.

Salomon finished fourth in the 2014 Big One for One Drop earning $2.8m.