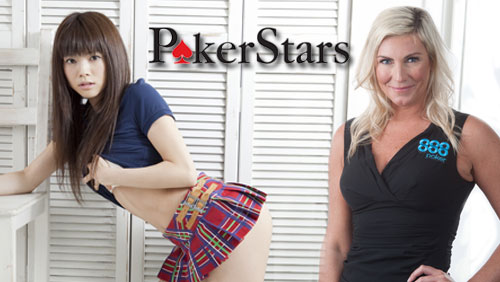 PokerStars have signed Japanese model and actress Yuiko Matsukawa, and Jackie Glazier has been unveiled as the new brand ambassador for Poker SA in Australia.

It’s the second time in a matter of months that the world’s largest online poker room has hired in Japan, showing that they are increasing their visibility in the land of the rising sun. Online poker star Kosei Ichinose joined the team in

“PokerStars champions the game of poker around the world and we are eager to promote its growth in Japan,” said Eric Hollreiser, Director of Corporate Communications for PokerStars and Amaya. “Yuiko Matsukawa is an exciting celebrity who has caught the poker bug and wants to share her love of the game with her fans. We look forward to working together to promote poker as an exciting, skill-based game in Japan and beyond.”

It’s the third PokerStars signing in recent weeks. Out with the old, and in with the new seems to be the motto. Twitch star Jason Somerville and Russian online sensation Liliya ‘Liay5’ Novikova have also recently joined the crew.

Yuiko Matsukawa recently appeared at the Macau Poker Cup and had this to say about her experience: “I was honored to participate in a major poker event as a PokerStars brand ambassador. In the beginning, I was a bit nervous, but eventually I found myself enjoying the game in a relaxed mood. I really appreciate the fans that cheered me on during the competition. PokerStars provides us the opportunity to play poker on smartphones and tablets, so you can enjoy games everywhere and anytime. I will continue to brush up my skills for the next tournament. Please wish me luck!”

One woman who we won’t see in a skimpy schoolgirl outfit anytime soon is Jackie Glazier.

The 888 ambassador, and WSOP bracelet winner, has been unveiled as the new ambassador for the Poker SA tour in Australia. It’s not just Glazier who will partner up with Poker SA. 888Poker will also join forces by offering online satellites into the Poker SA events.

Glazier is one of the many professional poker players who have jumped onto the Twitch platform bandwagon recently. Her channel is Jackstar Home Games if you want to check it out.

I had a peek the other day.

One punter asked her why she was folding so many hands.

“Because they are really shit.” Said Glazier.